Share All sharing options for: Dynamo at New England Revolution: A Lousy Draw?

In what can only be described as continued horrific officiating by a repeat offender for the -- wait, how many are we up to now, 10 or 12? -- umpteen billionth time, the Dynamo managed a respectable draw with the New England Revolution at Gillette Stadium. A goal each by Will Bruin and Luiz Camargo helped the Orange avoid leaving Boston with nothing to show for their efforts.

While the first goal came off a set piece service from none other than the real Brad Davis, the second goal was a masterful display of offensive creativity as Brian Ching served up a gorgeous one-two with Camargo and Camargo was all too happy to nail the ball into the back of the net past a flailing Matt Reis.

Bit more in depth "analysis", and some seriously over the top exaggerations after the jump -- and maybe another Meme pic for you, too. Tempting ain't it?

For those keeping track, the Revs' goals were scored by Saer Sene, and while one was completely avoidable, the other just hurt. Hell, I'm still stinging. The call was right, though I regrettably must admit to such, but the match was marred by ineffective officiating much the same as we've come to expect from this particular referee. If there was one true bright spot for the officiating in this match, it came at the brilliance of the female assistant referee who nailed every offsides call, and deserves a gold medal after suffering working the same team with Toledo.

Toledo wasn't just bad, he was terrible. He was terrible to the point he got noticed, and repeatedly. Noticed so much, even, I feel the need to reflect upon how terrible he was. That should say something. A referee should NEVER be the focal point of a match -- either before or after -- yet after every match Toledo officiates, he is that very thing. Whether it's a match with the Orange, or any other team. Every team, every coach, every fan of MLS, simply cannot stand this official and his officiating style. He's better suited for other leagues where flopping is considered a right.

Enough about the bad officiating though, my heart already aches over the Penalty Kick call. Brad Davis' service into Will Bruin was magical. It brought back memories of seasons past when a set piece service from Brad would connect with a soaring Brian Ching for a go-ahead goal in the closing minutes of crucial games. It was reminiscent of playoff runs capped by set piece dominance, and that is something I hope we continue to see as the season progresses further toward the playoffs.

The Dynamo have and always will be the best set piece team in the league, and so much of that is owed to Brad Davis' ability to serve the ball in perfectly and timely. Yet, some of that also is owed to Kinnear, who ensures match in and match out his players are not just ready for set pieces, but are chomping at the bit when they happen. You can't help but love a team so eager for set pieces every game, even if they don't always turn out as beautiful as this one.

Another highlight of the match was the moment Je-Vaughn Watson was subbed out and Luiz Camargo was subbed in his place. Camargo brought more rhythm to the offense once again, and while the game seemed to loosen up for both teams as they tried to pour it on, the Dynamo got the better of the possession.

We kept track of how many times Watson lost the ball in the run of play. We got up to 9 or 10 (I forget the exact number), and for a player in the position of CAM 9 or 10 is just far, FAR too many giveaways. Two or three of those giveaways resulted in Revs chances on goal almost directly from the giveaway. The fact Watson continues to start just stymies my synapses. It just simply does not make sense to start Watson at CAM.

In conclusion, the Dynamo deserved better than the result gave them. They fought and fought, but you can only battle craptastic officiating for so long. I'm proud they managed to come back the way they did, and only hope Dom has seen the light when it comes to starting Camargo. He makes things happen.

And that brings me to the Meme I promised before the jump. 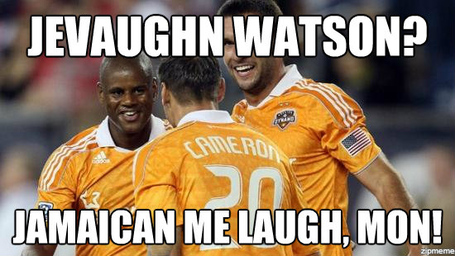