It's that time of the year again when the MLS Players Union releases the latest player salary information. There's no real surprises for the Dynamo. Brian Ching's salary is way down compared to last season (we knew that), Brad Davis is the highest paid player on the team and Tally Hall got a massive, and deserved, raise.

Remember that Kofi Sarkodie and Will Bruin are still both part of Generation adidas, so they're salaries don't count against the cap.

There's no doubt the best bargain on the roster is Adam Moffat at just under $60k/year. Jermaine Taylor is a close second at roughly $65k/year.

You can see salaries for all the players in the league here, but if you're just interested in the Dynamo's numbers, here you go: 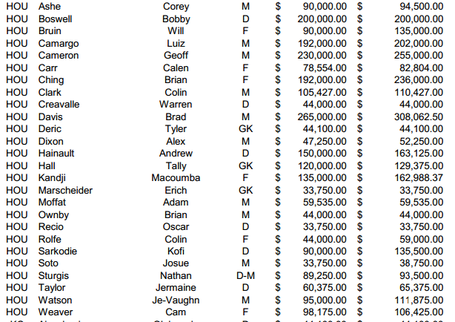 What are your thoughts on the salaries?