Welcome to Dynamo Theory's live game thread for tonight's Lamar Hunt US Open Cup Match between the Dynamo and the San Antonio Scorpions.

Please feel free to post at will here if you are following the match, which is being live streamed on HoustonDynamo.com. 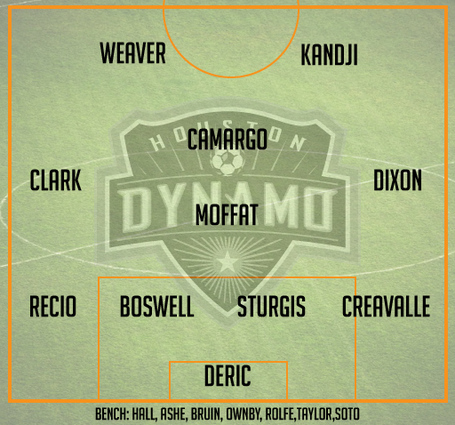 All-time series: This is the first meeting between the two clubs

PREVIEW The Houston Dynamo will kick off their 2012 Lamar Hunt U.S. Open Cup campaign with a trip three hours west to take on the San Antonio Scorpions of the North American Soccer League (NASL). The Scorpions advanced to face the Dynamo with a 2-0 win over PDL club Laredo Heat on Tuesday, May 22. The Dynamo are coming off a 2-1 win over the LA Galaxy on Saturday, while the Scorpions came from behind to earn a 2-2 draw against FC Edmonton this past weekend. The winner of Tuesday's match will advance to face the winner of FC Dallas / Charlotte Eagles.

THE OPPONENT The Scorpions are an expansion club, playing their first season in the NASL. San Antonio currently sits in third place in the NASL with a 4-3-1 record (15 points). The Scorpions are led by Pablo Campos who has three goals and one assist through eight games. Campos previously spent time in MLS with the San Jose Earthquakes and Real Salt Lake. Scorpions defender Ryan Cochrane played for the Dynamo in 2006 and 2007 before being selected by the San Jose Earthquakes in the 2007 MLS Expansion Draft. Cochrane was traded back to Houston in August 2009 and played for the Dynamo through the 2010 season. Midfielder Kevin Harme was traded to the Dynamo in January 2010, but was waived after three months. Midfielder Josue Soto is currently on loan to the Scorpions from the Dynamo but is only eligible to play in the Open Cup with Houston. Soto has one goal in 411 minutes of action for San Antonio. Midfielder Walter Ramirez will miss Tuesday's match after picking up a red card in San Antonio's second round match against Laredo.