Share All sharing options for: Beat Frisco Week: Remember, They're NOT Spectators!

Marketing is a difficult task for every business, organization and sports franchise. It takes skill to not only create interesting and appealing advertising, but executing the campaign is equally as difficult. Done well, it can change the fortunes of a company. Done wrong, it can make you the focus of ridicule from consumers. 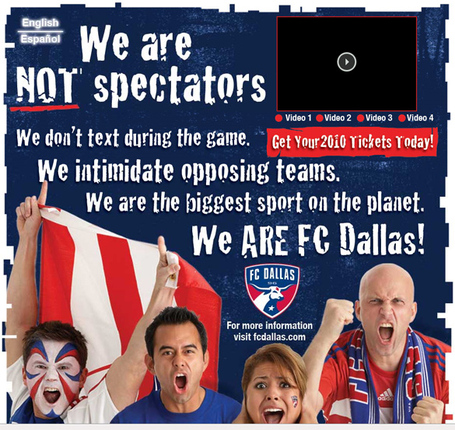 Have you ever been to FC Dallas Stadium? I have. They ARE spectators...at least the few thousand that bother to show up. They text and tweet during the game. They don't intimidate anyone, especially those banner hanging in view of the television sight line that were made by the front office, not fans. They are right in that soccer is the biggest sport in the world, but people living in the Southern Oklahoma area are barely aware of their existence.

Oh yeah, who the hell are those people in the ad?

Fortunately, this weekend's match is in Houston. The stadium will be full and the Dynamo will win.