Daniel Hernandez's Spitting Allegations Are 100% False and We Have Proof

Share All sharing options for: Daniel Hernandez's Spitting Allegations Are 100% False and We Have Proof

Last night FC Dallas midfielder Daniel Hernandez accused Dynamo defender Jermaine Taylor of spitting on him. An ugly accusation to be sure, but fortunately we can prove beyond a shadow of a doubt, that Taylor did not spit on Hernandez. In fact, we can show that what hit him in the face was water from a water bottle.

We can be so bold thanks to Dynamo Theory reader BerlinTexas who spotted something in the post-match press conference video. A huge thanks to him for finding this for us. 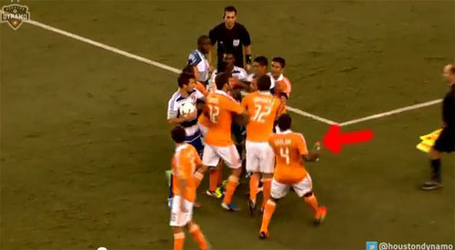 Taylor came in to the fracas after it kicked off carrying a water bottle. There it is in his hand. 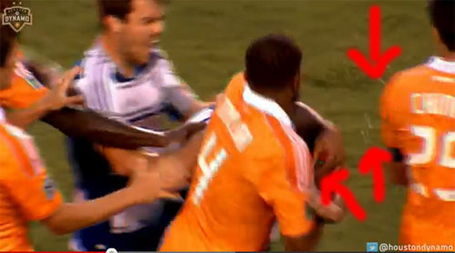 After Taylor and Hernandez began to tussle, water is squirted out of the water bottle which just happens to be pointing right at Hernandez's face.

So there you go, simple explanation. In the heat of the moment, you can certain understand that Hernandez might of believed it was spit, but this proves that his theory was false. It happens, but in the future Hernandez might hold back on the accusations before more information is available.

The MLS Disciplinary Committee will not doubt be looking at this incident and while either player could be fined and/or suspended for the pushing and shoving, there should not be any action taken towards Taylor in connection to the spitting allegation.

Hopefully these screen caps will help prove Taylor's innocence beyond a shadow of a doubt.