Share All sharing options for: Soccer Science: Side Effects

Hello again, DT-goers. First off, apologies for my lengthy absence. Not that I am deluded enough to think that hordes of orange-clad readers were waiting on bated breath for my return, but I do hope it was noticed...or at the very least you felt some dull aching at not being lectured on science in a while (that happens to people, right?). Anyways, I am back with another Soccer Science post, and today were talking formations. In an attempt to cure the squad's sudden susceptibility to conceding goals, a change from a 4-4-2-ish look to the current 4-3-3 was made. The results have been pretty obvious, even if you only check the box score. We aren't giving up goals, but we have suddenly stopped scoring them. Our massive shift to treat this problem has hurt our own offensive strength, just as it hurts our opponent's. Why? Lets take a jump for a summer soccer science.

When doctor's treat an infection, the drugs they use target parts of the infecting agent that aren't shared by you. In doing so, they can effectively damage something inside you without hurting your own cells. This is relatively easy in bacterial infections, as the infection is vastly different phenotypically (how it looks/acts) when compared to you. Bacteria have different cell walls, membranes, and protein agents that are easy targets for drugs. However, with fungal infections, this is a much different situation. Like mammals, fungi are Eukaryotes, and thus share many phenotypic traits. Because of this, there aren't many "easy" targets. Anti-fungal drugs, then, target small details in the fungi. For example, Natamycin is a polyene drug that binds a sterol compound called ergosterol in the fungal cell membrane, damaging their cells. However, ergosterol is very similar to cholesterol, an important component of the human cell membrane. Because of this, anti-fungal medication is rife with side effects, but is still effective.

Similarly, the switch from our 4-4-2-ish to 4-3-3 has solved the apparent defensive woes, but at the same time has damaged our ability to attack effectively. In arguing against the new formation, the MLS power rankings compared it to a bulldozer in the Indy 500. Thats a cute analogy, but I don't find it particularly accurate. Sure, it has slowed us down, but I hardly see the opponents flying past us (except when it comes to our outside backs getting toasted on the wing). Instead, a fitting analogy would be the Indy 500, and we've poured a foot of mud on the racetrack. Everything has slowed down. With the help of the Opta Chalkboard, I am starting to see why. Comparing the terrible result against Montreal (4-1-2-1-2) to the slogging affair in Kansas City (4-3-3), a trend is starting to surface. Let's see if I can convince you of the same:

Looking at defensive plays made by Moffat, we can see a huge difference in his position on the field. While he is winning a comparable amount of tackles, its where he wins the tackles that delights me. There are 6 "ball recoveries" or "interceptions" (black dots) high up the field. That shows a general theme for our defense, defending higher up the field. Comparing that to Moffat's play against MTL, we see a much different result. Again, he is still winning a lot of tackels. Moffat's engine isn't going to fail us in defense. But the defensive plays are all clustered right around our own 18 yard box. We are bunkered back against the MTL attack. The new 4-3-3 allows for more efficient defending by Moffat higher up the pitch, increasing the probability of successful transitions to offense and decreasing the chance of being pinned back.

In much the same way, the 4-3-3 is allowing for greater cover by our LB/RB pair. While I will be the first to bemoan Ashe's tendency to leave us naked on the outside, the new formation is allowing us to help decrease this. Looking at the crosses into the box by Montreal compared to SKC, we see a drastic change. In Montreal, 6 crosses entered the box, with only one coming from a corner. In KC, however, no crosses came from open play, with only 3 corners and one FK threatening the box. Considering two of Montreals 4 goals came from crosses (one open play, one corner), this is an obvious improvement. The midfield cover on defense, quite interestingly for a 4-3-3, is forcing the few serious attacks to the center of the field, as opposed to allowing multiple threats from outside.

One thing that sticks out in my mind, from both the Chicago game and the Kansas City one, is Kandji having to track all the way back to our defensive endline to defend in place of Ashe. That is, quite honestly, absurd. I will say that Kandji deserves a ton of credit for having the lungs, and considerable pair of balls, to play in that manner. And while that certainly helped our defense, it crippled our offense. Looking at Kandji in SKC compared to Bruin (playing left forward) against MTL, we can see a major difference in field cover. For one, the 4-3-3 has shifted the left forward play to the left third of the field, almost exclusively. But its his tendency to cover far back in defense that worries me. Yes, the 4-3-3 allows Ashe to overlap and play a more attacking role compared to the 4-4-2, but Kandji should not be tracking back. In theory, it should be Brad, but his offensive prowess should not be stunted by offensive help from Ashe. A switch by Moffat to LB when Ashe overlaps could help this. 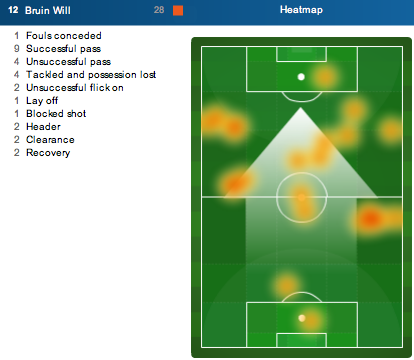 The second source of concern in the 4-3-3 is Bruin's obviously stifled offensive play. He is new to the 4-3-3, and it shows in the amount of touches we have been able to get him. Next to Kanji's play, above, I showed his play against Montreal. What allows him to get so many chances on goal is his multiple touches at the top of the box. His free movement in the 4-4-2 allowed for this. However, in the 4-3-3, with him spearheading the attack, he seems a little bit lost. Against SKC, his touches are few and far between. Most concerning, however, is his need to come back further for the ball a la Rooney. Bruin is not Wayne in positioning or look (a fact that my fiancee noted when she stated, several times, how dreamy the Dancing Bear is).

Not much to say here, other than the fact that both Bocanegra and Abby Wambach make me feel wildly inadequate, in separate yet completely similar ways.

Zep Video of the Week

So what are we to do over the coming weeks? In my opinion, I hope we stick with the 4-3-3. Bruin is young, and will take some time to acclimate to his new role. When Ching has come on as a late substitute, his maturity has resulted in automatic offensive productivity. If WIll can figure it out, we should have a fresh 65 minutes of offensive effectiveness to go along with our newfound (or re-found) defensive stinginess. His Dancing Days (eh? eh?) are soon to return, methinks. But what do you think? Stick with the 4-3-3 or cut and run?