Its been a wonderful couple weeks, Orange fans. Helmets removed at will, Bears a-dancing, and wins to go along with it all. I'm even getting caught up in the excitement. Sometimes I find myself ripping off my bike helmet on the way to school just to do the "Dancing Bear" across the BCM campus. Needless to say, morale is high.

Central to this wonderful four match win streak has been a group of men willing and able to adapt to a new formation, our 4-3-3, and differing tactical adaptations of it in order to take down varying flavors of opposition. Oh, you want to dominate the middle? Watch out for our attacks from the wing. Ah, you think your home field advantage will turn the tides? Try not giving us 60+% possession.

A big thanks should go out to Mr. Will Bruin, and his constant improvement under the 4-3-3. It might not be evident in a wealth of goals, but it is in wins. Just like a nerve synapse, Will has been able to adjust himself to different challenges to allow our squad success as a whole.

Only a few spoilers there, unlike the constant disappointment that is NBC Olympics.

The human nervous system is an ever-changing environment. Whether its the things we put into our body, or the output we use to go through our everyday lives, nerves are bombarded with a multitude of electrical signals. To integrate and analyze each of these is central to our survival. In doing so, nerves are able to change their neighbors and interactions in order to perfect electrical transmission. One of these changes is called Long Term Potentiation, or Plasticity. LTP is the nerve cell's ability, upon its recognition of a recurring signal, to adjust its membrane components to maximize output. Its simple: if a signal to activate a nerve comes every second, the cell figures it out and increases its response to meet demands, and produces machinery to respond in the long term. This is adaptable to any number of signals and stimuli. Its the marker of a truly flexible and successful nervous system, and one of the main reasons you can remember what happened yesterday.

A couple weeks ago I noted that our success moving forward was dependent on a few things, one of which being Bruin's ability to pick up the 4-3-3. I hoped for his movement off Kandji and Boniek (now Carr) to result in a hoard of goals for him. However, a completely unexpected event occurred in the meantime. While he did get a goal in that wonderful event against DCU, since then Will has been exceptionally Ching-like.

Here's a look at Will's coverage of the field against DCU and SKC, respectively.

Against DCU, we found ourselves up a man and goal on a team, looking to put the game away. Because of that, Bruin had the freedom to attack at will, filling the box for a considerable amount of time. However, against SKC, we faced a team (albeit up a man) with the skill to threaten us. In combatting this, Will showed the selflessness to work off of the wing players, occupying a more central role

Against Montreal, we see more of this same supporting role from Bruin.

Again, his field coverage is staying more central, with less forays into the box. When he does enter the box, it is usually in a supporting role - as witnessed the first goal of the match. His movement into the box, but away from goal, sets up the pass back to Kandji that you can see in both images above. This play gives me a lot to be excited about, as it reminds me of the movement and play Ching has adopted over the last year.

And, with Will injured this week, it was time for Ching to step up and retake his spot in the starting 11. How would his veteran mindset adjust to the 4-3-3? Seamlessly. 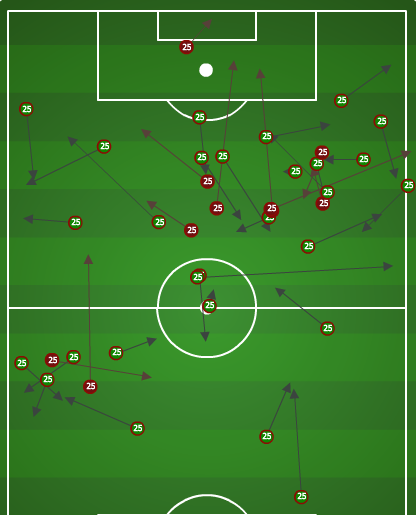 Now, that figure is absurdly muddled, as Ching was very busy north of the border. So, trust me when I say that the stats show 28 successful passes and 10 unsuccessful passes. Looking at the figure, you can see that Ching was occupying a greater volume of the field left to right, but still trended to working right outside of the penalty area. Just like Bruin has been doing recently.

The obvious difference, in terms of play, is that Ching played this supportive role while also gathering a goal (on his only shot of the day) in the process. What allowed this balance? Simply by combining both styles.

That may seem like a cop out, because it basically is. Looking at Brian's game saturday, there is no singular thing he did that Will hasn't done this season. The supportive role, as discussed earlier, has been commonplace for Will the last two matches. And Ching's long run into the box to score? That's identical to Will's goal against DCU.

The wing play from the 4-3-3 will allow Bruin to make those long runs, late, into the box. That is how he can, and will, score goals - by playing off the speedy play on the outside. But the most important aspect of his play has been shown already: with his back to goal. He has learned to adjust his approach to the game in order to secure wins.

I just finished my second day in medical school. Pre-meds list many things for why they want to become a doctor - to help people, to make stacks on stacks of cash, or to add more to the wealth of medical knowledge. My reason was mostly involved with the whole "helping" thing, but I've found a new reason. While it may not be interview-worthy, it is certainly a perk: scrubs. Med school lets you wear scrubs daily, and considers it professional attire. That's like wearing PJ's to the workplace and your boss complimenting you on your professionalism. It. Is. Awesome.

I don't have the self control to resist saying Attaboy to him...so Attaboy, Will. There... its out of my system.

Bruin, despite his recent contusion, has been doing fantastic. I like to imagine the crescendo of this song playing as he "Dancing Bear" ' s all over the field during a celebration. Well, that, or Outkast's "I like the way you move", but that's for a different time.

Our four match win streak goes on the line against a suddenly Evertonian NYRB squad this week. And next. Luckily, we have the depth and plasticity in our squad to meet this challenge head on.