The Orange Film Room looks at: History being made in Azteca

Share All sharing options for: The Orange Film Room looks at: History being made in Azteca

Not much to say that hasn't been said. US Men's National Team coach Juergen Klinsmann took an experimental side to Estadio Azteca to face Mexico and won 1-0. And let me tell you, up until it actually happened there is no way on this or any of the multiple levels of reality that I even conceived I would be typing that sentence.

Fuzion made most of the important points in the previous piece, but there are a few I would like to make as well, as well as a few comments I made in Fuze's piece that bear expansion. First, how great was it to see Geoff Cameron in action again, and playing like we all hoped he would? Javier Hernandez is quite simply the best Mexican player I have ever lain my own personal eyeballs on, as Hugo Sanchez was somewhat before my main-football-watching prime. Chicharito is the complete package, young, quick, a true speedy forward. He is not only a great player from Mexico, but possibly the best player from CONCACAF right now as I think only Clint Dempsey on current form could even be in the same conversation as him.

(Hit that jump for more video, and to vote on the poll: Best US win over Mexico ever? You be the judge.) 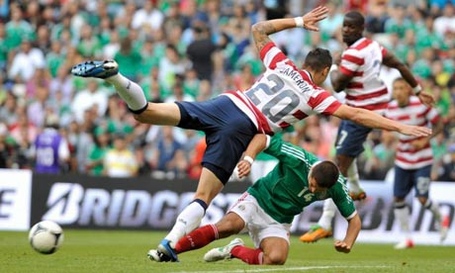 Cameron took Chicarito's full measure last night. Not once in the first half did Hernandez get free from Cameron, and in his best first half opportunity (about 1:44 into the highlight package above) it was Cameron's foot that snuck in there to get the ball away after a cross almost found Chicharito inside the six. Cameron was a tad less BAMF-like in the second half. Witness the free header from Lugo that went just wide as his man snuck behind him at the 2:15 mark in the video. Of course, he quickly righted himself. Look at his header at the 2:43 mark (57th minute) that deflected away a laser beam of a cross. Chicharito finally got clear of Cameron in the last 15 minutes or so, as shown by his misses in the 76th, 85th and 90th.

On those last two shots, much has been made of Tim Howard's saves on those two, and they were indeed amazing. Wow. Timmy. What a savior. But once again, and this may just be me with my Orange-colored glasses, I saw the hand of Geoff Cameron on that last one. On the miss in the 85th, Hernandez had all kinds of time to slot a shot through the crowd, and the deflection off Geoff almost beat Howard. That save was all Tim. But on the one in the 90th, what you saw there was three players all together at a very high level, Cameron, Chicharito and Howard. Timmy made the save, but look at the skill of Cameron there to alter Chicharito's flight in the air. Hernandez made a shot while off balance and falling backward. It was an enormous piece of skill just to get that shot off, and why? Because he was so well covered by Cameron. Sometimes, the cross is so on target, falling out of the sky just right, that it's all a defender can do just to be present in the area, and then hope your presence is enough to throw the striker just enough off either to (A) miss the shot or (B) make the shot weak enough for the keeper to make a save. And faced with that, a striker does so, so well, just to (A) get a shot and then (B) put it on frame. Credit goes all around on that last shot, and we are just so, so fortunate that it was Tim Howard in there to end the play.

Now, moving away from Cameron, let's just take a look at that goal again.

What a move from Brek Shea, who created this whole situation. The pass from Kyle Beckerman to Shea was a nice one, crisp and accurate, which is something you could say about only a minority of US passes on the night. However, once Shea megs the defender, the game was, ahem, afoot, Terence Boyd's afoot that is. She's move had everything, pace, danger, boldness, and, considering his recent travails, drama.

Full disclosure: A couple of minutes before, when he came on for Herculez Gomez, my reaction was "No. I do not like this sub at all. Not one bit." Now, the rest of you be honest, who among you did not view Shea's coming on as anything other than a potential disaster? Let's count the hands.

Those of you without your hands up, I hope you understand that the comment I am about to make, I make in the spirit of comity and sportsmanship: You are a bunch of dirty, freaking liars.

Now, with that out of the way, what a job from Boyd to hold that ball in traffic, staying calm and then executing that backheel. It wasn't the crispest backheel I've ever seen, and to be truthful, he almost missed the ball completely, but he got the job done, which is more than Chicharito could say. And the final finish? Juanny on the spot Michael Orozco Fiscal had the toepoke of destiny. One just hopes that San Juan doesn't go all Perugia on him and bans him from playing in Mexico again. (But if they do, Michael, you'd look pretty good in Orange. Just sayin'.)

And just because we can, let's look again at Tim Howard's saves:

Holy freakin' moley. In one week, the US National team has Hope Solo pulling off the save of the Olympics to secure the gold against Japan, and then Tim Howard last night. If these two were ever to get together, I think their kids would be born with freakishly oversized hands.

And then there's Mexico. Gold medal win on Saturday, owner of every single club and national mens title in CONCACAF at every level, and then this, losing to your biggest rival on the formerly secure parade grounds of Fortress Azteca. Them Mayan calendar wackos may just be right: From the highest of highs, boarding an express train to the End. Of. The. World.

Now of course, this was only a friendly game, and it means nothing, but then again, it's possible that it means something to fans. So the poll question I'm going to pose is this one, which I will ask after you see this video: