Soccer Science: Thinking Outside the Box

Share All sharing options for: Soccer Science: Thinking Outside the Box

Its a busy time of the "summer", orange fans. I put sarcastic quotation marks around "summer" because I am starting my fourth week of school, without a shred of sympathy for grade school children bemoaning the end of their breaks. Also, I'm a bit scienced-out for the week, so I'm going to let Opta add the science to the beautiful game as long as everyone is cool with that.

The most exciting moment of this past week was, by far, a certain Mexican-American defender scoring one of the best/worst goals in the history of everything. Whether you think it was luck (it wasn't. its just soccer) or unfair (boo hoo. It was hilarious), it did make for an amazing moment when literally no one thought it would or could happen.

Fortunate goal-scoring aside, the Howard/Edu/Cameron triumvirate was brilliant. A completely re-vamped defense held its own, while a star-starved midfield played...bad. How the defense stands up in the coming year will determine how important this win actually was. Come back during qualifying and lose by 3 and this win was pointless.

Similarly, and most important to the purpose of the blog, the Dynamo are entering a very congested schedule with a revamped side. And while the draw was dramatic on Sunday, the fact that we didn't win was disconcerting.

How good was the USMNT defense? And why wasn't the Dynamo offense clicking?

Hit the jump, or something.

Being so historical and all, there isn't much to say on the match in Azteca that hasn't been written already. The match wasn't "important", but the win was by far the most important in recent history. The result is irrelevant, as many Mexican and American stars were missing, but to the 14 Americans that took the field, the ironclad home advantage held by Mexico over the past...forever...is gone. Azteca will always be intimidating, but the concept of earning points in Qualifying there will not be.

A lot of writers are praising Brek Shea for his effort, and rightly so. I'd like to think I am responsible for about 0.00000001% of that goal, as Brek spent a sweltering morning about 8 years ago burning me down the left flank at River Grove Park in Kingwood, TX. So Wednesday was probably the first, and only, time I can say I know how it feels to be a Mexican National Team member.

I don't want to dwell too much on a USMNT match, but the game wouldn't have been the same had Mexico simply scored goals from their huge amount of possession. That's not to say the USMNT doesn't deserve the win, just that Mexico would have deserved it more had they won.

A casual look at the game would show that Mexico simply couldn't convert their opportunities. But looking at the stats, we see a very different story: 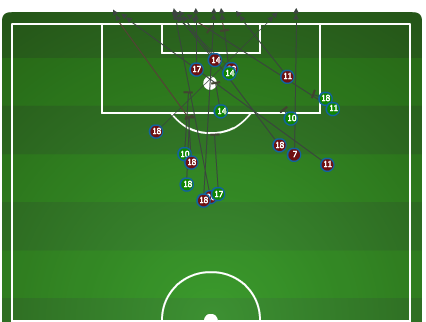 Of the 18 total shots taken, only 2 went on target. So you can say "oh, well, the US was lucky Mexico wasn't on target". That would be wrong. Focusing on shots taken inside the box, "high probability", we see 6 opportunities. The three closest chances came from headers, and were either missed or saved because of physical pressure from Edu and Cameron. There were two shots taken from the floor, and Howard came up big.

The rest of Mexico's opportunities were outside the box. When they were close, defenders were able to block them before they could develop. The rest of the shots were mere speculation: heat-checks that had no business being taken.

Overall, the USMNT defense did well to limit the real threats from Mexico, with only a couple legitimate chances forcing Howard into excellent saves. When you have a world class keeper, but you're playing in a place you've never won, that's all you can hope for.

At BBVA on Sunday, the tides turned a bit. Like Mexico, we enjoyed a considerable amount of possession. However, it seemed like whenever we kept possession around the box, no one wanted to take the shot. This was especially evident with Kandji.

His play from our defensive third to Columbus' 18 yard box was stellar. He took on defenders, put himself in the right position, and caused havoc on the flanks. But when he had put himself in that dangerous position, he choked. Crosses sailed over forwards, potential shots died during conception, and my sanity slowly degenerated into blind fury.

Some of you might be thinking - "ok, you're exaggerating a bit right"? No. I'm not: 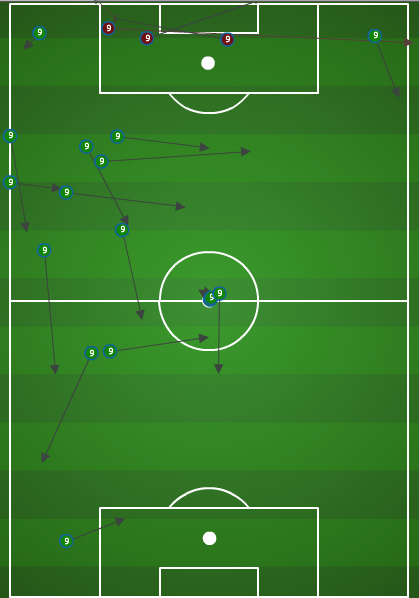 Literally, right when he crossed past the 18. The two exceptions were back-passes in the corners, but the rest was a conglomeration of failure. I'm being dramatic, of course, but its something to think about. Kandji needs to start taking the easy road instead of trying to be the hero every second.

Rap Music Qualm of the Day

I've written a couple of times in the past about some issue I had taken with a musical genre. I've discussed the lack of creativity in the country music scene, but never touched on that for the rap game. That's because, if anything, creativity has gone through the roof. Now, that's not to say the creativity is focused. For example: Rick Ross' newest lyrical renaissance, "Bag of Money"

I'm not sure about the background of said "chick", but I have a feeling she wouldn't enjoy being compared, physically, to a bag of money. Let's break this down. While I haven't seen a heaping bag of money before, I do watch movies. Typically, they are very skinny at the top, then bulge out dramatically towards the bottom. And that may sound good at first, but bags of money are also lumpy. Putting this all together, you get a lumpy girl that has a head the size of your fist and hips as wide as your car, with no legs.

Music Video of the Day

The troubles against Columbus came from our unwillingness to take shots at decisive moments, instead opting to force the issue with individual talent. The people who took the initiative and shot - Moffat and Davis - were successful. We need more of that leadership, especially in the hostile environments of the CCL. I would really, really, really like to win this tournament. And its gotta start tonight at the Tigres.

Did I just use Hall and Oates in one of my posts? Yes. Yes I did.