Share All sharing options for: MMCB: Building A Rico Case

Unless you've been away from the Internet for the last couple weeks, you've probably heard the news that midfielder Ricardo Clark has re-signed with the Dynamo after over two years in Germany. During that time we've seen Clark go from a national team regular to a forgotten man as he failed to ever break through with Eintracht Frankfurt. A rough performance in the 2010 World Cup didn't help either and thus there is some trepidation among the Dynamo fan base about Clark's return.

There's no doubt Clark was a huge part of the Dynamo's success in the first few years after moving to Houston and while many choose to remember his kicking off Carlos Ruiz (in the midsection by the way, not the head as many would have you believe), most of us remember a hard working, gritty midfielder that helped provide an effective link between the back line and the attack.

Clark's return to Houston raises some questions for some because he's making a good chunk of change, at least in MLS terms. Effectively, he's taking over the salary cap space formerly occupied by Geoff Cameron who is a work permit appeal hearing away from officially joining Stoke City. There's some concern that Clark's recent form doesn't warrant that large of a salary and that the Dynamo might not get good value...and that's fair, but in my opinion, pointless concerns.

The money the Dynamo have agreed to play Clark is money the team either would have been spending on Cameron or not spending at all. The Dynamo, with Clark or Cameron on the books, still have the 19th lowest payroll in MLS (based on the numbers released by the MLSPA). In case you'd forgot, there are currently 19 teams in MLS. I'm not complaining one bit about this because the Dynamo are clearly getting tremendous value for every cent they are spending on salary. Thus, I'm not concerned one bit about Ricardo Clark coming back, especially when it comes to the financial elements of the deal.

If Clark completely fails and is a total wash out, this is MLS and you can always get out of contracts. If he completely fails to make an impact or contribute in any way during the remainder of the 2012 season, the Dynamo can either trade or release Clark and move on. If Clark is able to rebound from his recent struggles and be anywhere close to the former player he was, then it's a huge win for the Dynamo.

This is a great signing, another great move by Kinnear and Canetti that has the potential to make their team better. Like I said before, it's salary they were already using on Cameron, so why not spend it on a player with a large amount of potential upside? Worst case, he never plays. Adam Moffat and Luiz Camargo continue playing in the deep midfield role and the Dynamo likely keep cruising along as one of the best teams in the league. Best case, we have Ricardo Clark pushing them for playing time and possibly over taking them.

Do you honestly think for one second that the Dynamo just brought back Clark out of pity or to help the guy out? They brought him back because they believe in Clark's ability and I'm guessing heard the right things from him when they approached him about signing with the team.

A motivated and driven Ricardo Clark, desperate for a chance to earn playing time and prove he's still a top player? I'd take a salary flyer for that any day of the week. So if you're worried about this deal, or concerned that Clark can't be the player he was, you really need to just stop worrying. If Clark doesn't sign, that's one less player on the roster as we head towards a playoff run and CCL group matches. With the transfer window closed, the Dynamo weren't going to be able to sign anyone else, other than through a trade or a free agent deal.

This is a low risk, high reward deal for the Dynamo and what's our mantra? In Dom We Trust.

Welcome back Ricardo Clark, I for one am ecstatic to see you back in orange. I doubt I'm alone on that sentiment. 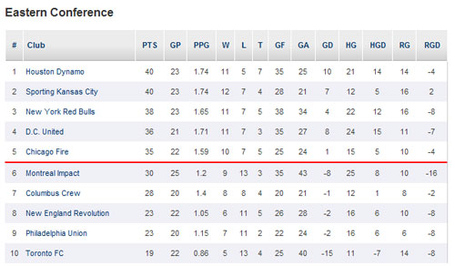