Cue the South Park Insheeption music, because its time for a Review in a Preview in a Review for the NYRB/Houston home and home series. To start things off, the Dynamo graced BBVA, Houston, and an NBCSN-watching nation with a one-sided smackdown on Friday. Modest scoreline aside, this was abuse on a felony level.

But I'm an optimist. I don't like looking at the negatives. So I'll turn my attention from the negative that is NYRB to the positive that is your Houston Dynamo, and the subject of todays Soccer Science, Jermaine Taylor.

First and foremost, congratulations to Jermaine for scoring the first goal of his Dynamo career. Reacting well to a broken play in the box, Jermaine made a perfectly-timed run to the back post to thigh home the opener. And, mere minutes later, he came within inches of redirecting a front post corner from Davis into the upper 90. However, offensive surprise aside, it was Taylor's continuance of his pre-injury defensive form that drew my attention.

So hit the jump for a very scientific toast to Jermaine in this week's Soccer Science.

Jermaine was able to do two things exceptionally well on friday - cut out NYRB attacks early, and distribute effectively for quick counters. Put another way, convenient to the scientific analogy of this post, Jermaine was able to tie the deep layers of out formation to the higher ones, while also protecting the team fom damage before it could occur.

In much the same way, the melanocyte links itself with cells from several layers of the Epidermis. While your skin is there to protect you, it is also susceptible to the damaging effects of UV light. Luckily, the ever-ready melanocyte, through its attachments, provides melanin to all the other cells in the Epidermis. In turn, this melanin forms on the surface-side of their nuclei, protecting their DNA. The melanocyte, therefore, is vital to the skin through its distributive properties as well as its proactive defense.

So lets take this in two parts, first: proactive defense. 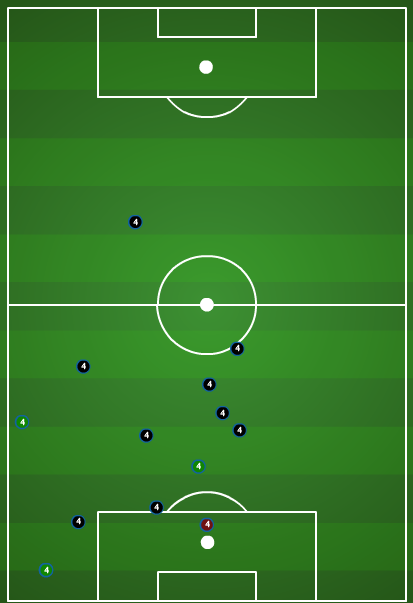 While NYRB have hit somewhat of a rocky patch, their previous successes had been based on getting Henry the ball in the box with space to shoot. However, Jermaine cut out these attacks before they could develop. When Le Toux would break off from Henry away from the box, Taylor consistently beat him to the ball. In turn, this forced Henry away from the goal, in hopes of finding the ball in space. That never happened. 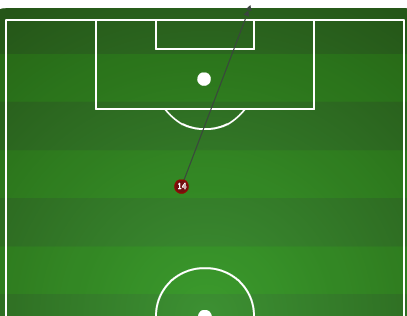 When you limit Henry's offense to one far-out volley, you've done your job. 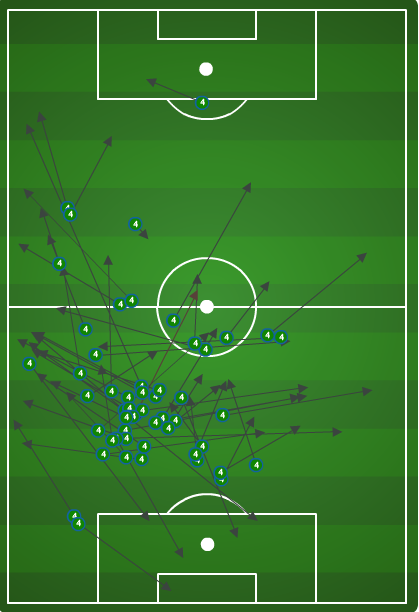 Taylor's passes vs. NYRB, in all their glory

Next, Jermaine' s distributive properties. Now, usually a center back racks up silly passing efficiency numbers based on multiple 5 yard passes among the defense. However, what's excited me about Jermaine's recent success has been his ability to win the ball and progress up the field before finding open attackers. In turn, he plays defense higher up the field and traps the opponent in their half, keeping them under constant pressure. Against New York, Jermaine dealt out 56 successful passes. And, sure, there was one unsuccessful pass, but you can't even see it on the figure above. When you are so good that your successes literally bury your lone "failure", its been a good day.

So here's to Taylor: our very own protective melanocyte. If we are to be the first team to beat Henry and co. in Red Bull Arena, we will need Taylor to provide similar protective and distributive efforts in the northeast - something I am quite certain he can do.

Before I start this, in all fairness, LA has been doing better as of late compared to their early-season form. They are showing that most people can put together a few stars and win against teams paying a fraction of their payroll. But upon Seattles 4-0 thrashing of LA yesterday, I simply can't NOT make fun of them, in song...

What does this have to do with LA? Just listen to the lyrics. Listen closely...ok not that close. Here: imagine this is a broken-hearted song from LA to the MLS Cup...

On the USWNT and Indirect Free kicks...

After the cheers, expletives, and thanks to everyone's deity of choice had settled down, even tempers began to discuss the call that led to the final US equalizer against Canada. With the Canadian...oh forget it, you all saw/heard about it. A free kick was called in the box for delay of game by the goalie for holding the ball for 12-ish seconds. Soccer dignitaries noted that this was a shocking call to make in an Olympic semi-final. Is it seen everyday? No. Was it warranted, necessary...perhaps even mandatory? Absolutely. Heres why:

A) Its the rule. No "warning" is needed when you double the alloted time.

B) When I was 8 I was playing one of my older brother's friends in FIFA '98 Road to the World Cup, the greatest soccer game of all time. Late in the match I led 2-1. With the ball in my goalie's hands, I waited for the final whistle, afraid of my opponent's chances of a late equalizer. The result? Not a computer-mandated punt, but a whistle from the animated ref - Indirect Free Kick...Goal...Overtime...Loss.

It took me years to get over that loss, and perhaps I'm still a little jilted. But if FIFA '98 knew the rules, so should a FIFA-trained ref.

But that ref was pretty bad. Good thing we won, or else I would've been pissed.

It feels good to be #1 in the East, but it doesn't count for much if we go to New York and lose. The team knows that, and is ready for a big rematch. I'm excited for this one, you guys.