Share All sharing options for: The Orange Film Room looks at Geoff Cameron

With the news that Geoff Cameron's work permit was finally approved and he is now a full-fledged member of Stoke City, it's time to take a look back at the Giraffe's top moments for the Houston Dynamo.

Making the point: I think it's fair to start with this one, Geoff's first goal for the Dynamo against FC Something-or-other at Robertson Stadium on April 6, 2008. The defending MLS Cup champions has just come back from a 3-0 pasting in the season opener at New England (in which Cameron came on in the 86th for his first action in Orange) and were very much looking for a win over the Candystripers. The game was something of a see-saw affair, with Franco Caraccio (remember him) getting on the board in the 21st before Kenny Cooper scored two straight, one at the death of the first half, to put Frisco in front. A Drew Moor oggie in the 57th drew us level for about 20 seconds before famed Brad-Davis-nut-kicker Arturo Alvarez quickly put the bad guys in front again. And then, in the 93rd minute, this happened (Forward to the 2:10 mark, and I apologize about the music in advance):

Notice served. I think this Cameron kid might just turn into something special. And one other note, this was the final game in the suspension served by Ricardo Clark for his completely justified and no-court-in-the-land-would-convict actions here.

Best against the worst. Cameron would go on to torment the Frisc-ites again. For more on that, click the jump here...

I knew you couldn't resist clicking the jump after that kind of lead-in. Cameron closed out his Dynamo scoring run the way he began it, by doing the deed against the southern Oklahomans (apologies to Oklahoma):

The last goal ever by Geoff Cameron in a Houston Dynamo uniform is still fresh on everyone's mind. The score which gave us our first road win of 2011. Soon thereafter, Pizza Hut pulled their naming sponsorship from this stadium. Coincidence? Sure. Whatever makes you feel better Frisco.

I could watch that clip time and time again. And I'm sure you can too. Let's all just do that. Right now.

Starting and finishing. In an otherwise disml 2010 campaign, Cameron was on fire here. Note how he starts the play with a scoop over the defenders' heads, and then picks it up on the run and then beats Keller. I was there for this one and, let me tell you, it was even more impressive in person.

20 at 20: When Cameron went down injured in a game at Chicago early in 2010, it was an early portend of what would become the worst season in Dynamo history. Cameron would not come back until later on that season. But on May 1, fans started a drive to raise the No. 20 in the 20th minute in a game here against the Kansas City Wizards. It was an impressive moment in a 3-0 Dynamo win. Cameron would later say that he was watching the game with his dad and had no idea this was going to happen. When it did, he was blown away, and swore to his dad that he was not going to stop until he came back better than before. Mission looking good so far, Geoff. 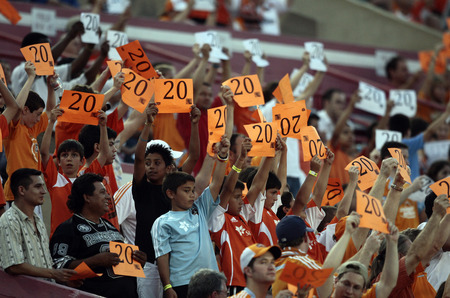 Don't you flop here. Telling Jack McInerney what is what and who is who. Son, get the hell up off that deck. You look like a speared sturgeon down there. It's at about the 7:50 mark in the video and 89th minute of the match.

And here's the image: 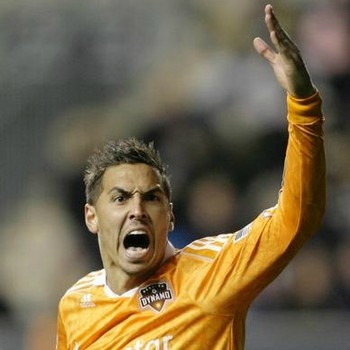 Geoff. Fare thee well. We'll always hold a special place in our hearts for No. 20.