Thinking about what to write this week, I wrestled with two potential introductory statements. One would be to take you through the moments leading up to, and after, Chicago's opening goal from my perspective. The other option is similar to the first, except its just a string of unforgivable obscenities punctuated by a tear-soaked laptop.

So, for everyone's sanity, I'll opt for the first.

Before the game started, I went to mass with my fiancee. It was a peaceful time, a reflective time, setting myself up perfectly for a steep decline into madness. We got into the car and headed down University towards the TMC, when I suddenly realized that it was 6:08 pm, and the match had probably begun. I pressed "AM" on my radio, pre-programmed to sports talk 790. But, just like accidentally touching a burning hot surface, I recoiled in pain when my touch was met with a reply of "YARKOOOO 51 seconds in!".

I pressed FM, and silently wept as "call me maybe" played over the airwaves.

After the jump I'll continue my sad, sad, journey through the Chi-Town loss. But fear not, science and optimism (?) awaits.

What took place over the next 2 hours can only be described as frantic instability. My emotions ranged from pumping my fist and screaming (after Kandji's goal) to banging my fists and crying (after Kandji's "goal"). Even Chingy's timely hope-giver didn't fully assuage my sadness, as I only had a minute to process it before Chicago slammed the proverbial door in my emotional face.

Through all this, one sentence kept coming from my mouth:

Who the hell is this team, and what have they done with July?

Because I really don't recognize this shade of a team. Here's a quick example: 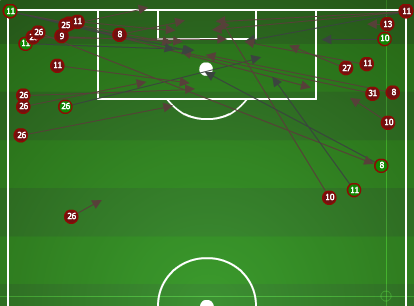 Our wide players could not take advantage of our possession late in the game.

Tired legs has a lot to do with it, as all three goals displayed cases where guys just couldn't muster the energy needed to stop the Chicago attack. But this marks another bad result in a string of important MLS matches. Our CCL work has been great, but it looks like that came at a considerable cost.

July made us out to be a dangerous team, perhaps primed for a deep postseason run. A recent poll here at DT showed that essentially all of us considered success to be a deep playoff run. So, where are we now? This is wildly subjective, but there are two possibilities for our recent woes.

1) We are a bad team that spent July convincing everyone else we were good. This is similar to Batesian Mimicry, where a harmless animal models its coloration after a deadly predator. The most Texan example of this is the Milk Snake (Red on Black...), which looks like the deadly Coral Snake (Red on Yellow...).

2) Or, are we currently in a situation where we are just pretending (unintentionally so) to be harmless? This is termed aggressive mimicry, where a dangerous predator pretends to be harmless, until they eventually strike. The coolest (nerd scale) would be the Zone-Tailed Hawk. It hangs around the Turkey Vultures, kinda flies like them, kinda looks like them, but then breaks formation to attack its prey.

So which one are we? The next few weeks will make that clear. The road isn't getting any easier, with 3 road games and 4 home games left to go, along with the two CCL matches we have left to play at home. Being optimistic, but also realistic, I would hope we can sweep the next two CCL matches and go 5-1-1 in our remaining schedule. But it all starts with a monstrous game against RSL tonight.

This has nothing to do with my subject today. Its just a good song from what should hopefully be a great album. Enjoy the match tonight, and pray for my sanity. Hopefully this is the first match we show ourselves to be Zone-Tailed Hawks and not Milk Snakes. Cheers.