2012 Dynamo Theory Creamsicles: Will Bruin is Forward of the Year!

The first of ten Creamsicles awards is out. Forward of the Year belongs to the Dancing Bear, Will Bruin.

Share All sharing options for: 2012 Dynamo Theory Creamsicles: Will Bruin is Forward of the Year!

The wait is over! The ballots have been submitted, counted, recounted, and are now here for your viewing pleasure. Dynamo Theory will announce the 2012 Creamsicles award winners one by one over the next 10 days, starting with Forward of the Year.

Truth is the Dynamo really didn't have much competition here. The Dancing Bear built upon his rookie season success with an outstanding sophomore year. Bruin was a dominating force in MLS from the start of the year and finished on a strong note as well. Even when Dominic Kinnear switched formations after acquiring Boniek Garcia, Bruin was still a factor in most games, even though he struggled to find the back of the net.

In 32 regular season games, the Dancing Bear finished with 12 goals and 4 assists. In the MLS Cup Playoffs, he added 4 goals and an assist. Not bad for a second year forward. The future is definitely bright.

While Calen Carr put in a number of strong experiences and Brian Ching was good off the bench, this award was a no-brainer for Bruin. 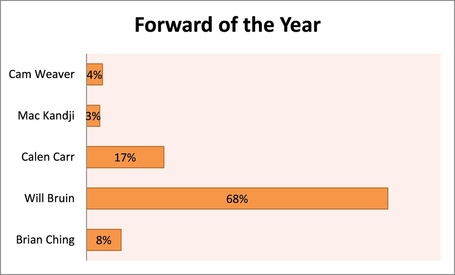 "This is an easy one for me. My big worry at the beginning of the year was where the goals would come. Even with Ching's return, I knew we needed Bruin to pick up the majority of the slack. In that respect, The Dancing Bear came through with flying colors. He was definitely streaky in his scoring (what striker isn't), but his ability to find space in the box showed a maturity well beyond his years."

"Will Bruin has never heard of a sophomore slump. He built on his good rookie year, by putting himself in the top scorers in the league. When Houston switched formations, he continued to do things you can't measure in stats even though he struggled to score. But in the end, 12 goals by this young man mean he's second to none."

"The Dancing Bear showed that he is definitely a top goal scorer in this league. I expect great things to come."

"He came up short in the final but had been our stalwart for a good part of the season, and even as he didn't score in the 4-3-3 run he still contributed during that time, only to re-emerge later in the season."

"The Bear breaks out, hinting at a career that may even overshadow the Icon's (Flyin' Hawaiian)."