The Creamsicles winners continue... and this is the final and most important player award - Team MVP. There was only one man that carried the Dynamo on his shoulders - MVP belongs to Brad Davis.

The wait is over! The ballots have been submitted, counted, recounted, and are now here for your viewing pleasure. Dynamo Theory has released the 2012 Creamsicle winners over the last 10 days and will be complete today with the release of the final two awards.

Let's face it, Brad Davis has turned into quite the leader on this Houston Dynamo club. Last season, he was runner up to Dwayne De Rosario in the MLS MVP voting. This season was nearly as productive for the left footed team captain. From the start of the season, Davis' play was solid as he set a career high in goals with 8, and added 12 assists. Davis now has 12 assists or more in each of the last four seasons.

The Honduran Boniek Garcia took Houston fans by storm, re-energizing the men in orange midseason. He made this race very close. And to think, he only played half the season. Davis won this award last year at Dynamo Theory, but we have a feeling Garcia takes it in 2013. 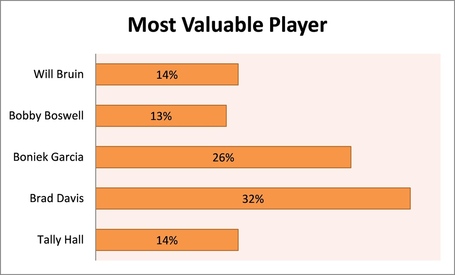 Staff Vote: Tie between Tally Hall and Brad Davis (40% each)

"Davis may have carried the team for the whole season, yet Garcia transformed it, even prompting Dom to do the unthinkable- changing formation!!!"

"Without a doubt Tally "The Wall" Hall for his work over the entire season."

"I think Boniek affecting this team more than anyone ever thought he would. It's rare that a player makes everyone around him better, but he does just that."

"Career high in goals. Double digit assists. He's still the playmaker for this team, in my mind. Boniek gave him a run for his money, but he hasn't been with the team all year."

"Brad Davis continues to be the best Dynamo player on the field. He's taken over as the full time captain and leads the team well. Davis getting a career high 8 goals, while adding 12 assits is a no brainer for me. Dynamo MVP - no runner up."