Houston Dynamo get a Generation Adidas player at number thirteen. Jason Johnson. We will have a wonderful introduction for him in a bit, but for now, feast on the picture below. 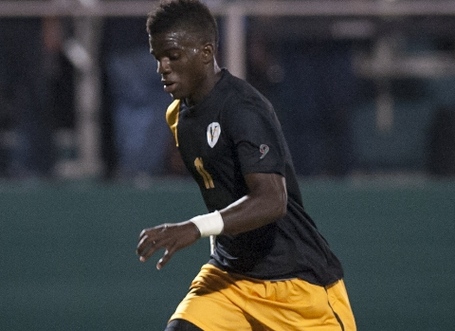 Also, he is from Jamaica, we know how much Dom likes his Jamaicans!

H/T to Martek for the following info. From the tropigol.com site:

Johnson and the three players will participate in the MLS player combine and enter the professional ranks through the 2013 MLS SuperDraft, which will be held in Indianapolis on Jan. 17.

Johnson has combined speed and strength with a relentless work rate to make him one of the most exciting forwards in college.

A native of Happy News, Jamaica, Johnson made his debut for Jamaica’s senior national team on February 10, 2010, coming on in the second half of an international friendly against Argentina.

The 6-foot, 180-lb. Johnson, who was named to the Atlantic-10 first team, led the conference with 13 goals and 32 points, while adding six assists (eighth in the league_.

He also made his presence felt nationally, ranking in the top 10 goals and points.