2012 Dynamo Theory Creamsicles: Boniek Garcia is Midfielder of the Year!

The Creamsicles winners continue... Midfielder of the Year belongs to the Honduran Boniek Garcia.

Share All sharing options for: 2012 Dynamo Theory Creamsicles: Boniek Garcia is Midfielder of the Year!

The wait is over! The ballots have been submitted, counted, recounted, and are now here for your viewing pleasure. Dynamo Theory will announce the 2012 Creamsicles award winners one by one over the next 10 days, continuing with Midfielder of the Year.

Midfielder of the Year
Boniek Garcia (39%)

This was a close one. A battle of the Dynamo midfield heartbeat. Fans seemed to be split on this award, but ultimately Boniek Garcia pulls out the slim victory.

Garcia joined the Dynamo at the end of June, but made an immediate impact, notching an assist in his first game against the Philadelphia Union. He re-energized a Dynamo team that had fallen flat. Coach Dominic Kinnear wanted Garcia for quite some time and finally got his man. His addition even made the MLS coaching legend stray from his classic 4-4-2 formation and give the Dynamo new life in a 4-3-3 led by Garcia's spark.

Garcia finished the MLS regular season with 4 goals and 6 assists, adding a goal and an assist in the MLS Cup Playoffs.

This vote was one of the closest, with Brad Davis close behind with 35% of the vote. The Dynamo Theory staff voted unanimously for Davis since his contributions where from start to finish in 2012. This one should spark much discussion. 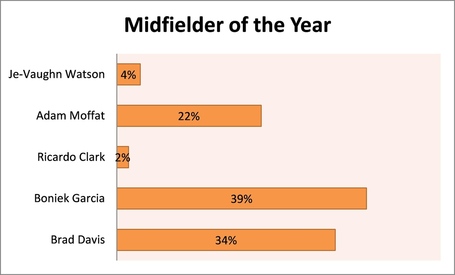 "Hardest vote. Between OBG and Brad."

"Tough call...Rico was a beast in his return...Davis was "Davis"...but Boniek was the missing piece that got the Dynamo over the hump."

"Even though Garcia, Davis and Clark garner more headlines, Moffat's steady contributions in midfield have kept us on an even keel all season and into the post-season."

"He (Davis) was just too dominant. Maybe had Garcia played a full season, we'd have more of a discussion."

"Davis was a leader in assists this season and has grown into a true leader on this team. He has stepped up to fill the leadership role that has been left open by Ching's diminished playing time. He works hard up and down the field dropping back to defend as needed."