2012 Dynamo Theory Creamsicles: Bobby Boswell is Defender of the Year!

The Creamsicles winners continue... Defender of the Year belongs to the anchor of the backline, Bobby Boswell.

Share All sharing options for: 2012 Dynamo Theory Creamsicles: Bobby Boswell is Defender of the Year!

The wait is over! The ballots have been submitted, counted, recounted, and are now here for your viewing pleasure. Dynamo Theory will announce the 2012 Creamsicles award winners one by one over the next 10 days, continuing with Defender of the Year.

Defender of the Year
Bobby Boswell (65%)

Boswell anchored the Dynamo backline as not only a standout defender, but a vocal leader on the field and in the locker room. It's evident that Boswell likes to have fun and is one of the more outgoing Dynamo personalities, but when it comes to shutting down the opposing offense, he's not messing around.

Statistically, Boswell set several career marks in 2012. He played in 33 matches, starting all of them - both career highs for the 29 year old defender. Additionally, he hit an all time low in yellow cards with 4 on the year. He continues to be a force in the box on Dynamo set pieces as well, contributing offensively with two goals and an assist.

Jermaine Taylor stepped up in Cameron's absence as well and had an incredible season, and Corey Ashe has quietly become one of the best left back's in MLS, but without Boswell this Dynamo club would more than likely suffered a different fate in 2012. 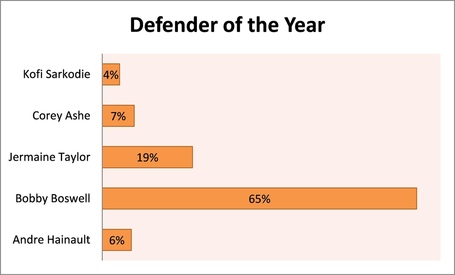 Here are some comments taken from the surveys about fans respective picks:

"Boswell has been a great defender this season holding the backline together as Geoff Cameron left for the EPL. As the season progressed you could see him step up as a leader while his play on the field also matured."

"Boswell was the rock in the back. Through the tough transition from losing Geoff Cameron, integrating Jermaine Taylor, and dealing with the Hainault to Sarkodie shift, Boswell kept it all together. In the playoffs, he was probably the best all-around player."

"Taylor is a better physical defender, but Boswell used positioning and his marshaling of the defense to get things done."

"Really a no-brainer here. Bobby stepped up big time this year after the departure of Geoff. He established our central back line as something to be feared, as opposed to the weak spot it could have been."