2012 Dynamo Theory Creamsicles: Warren Creavalle is Rookie of the Year!

The Creamsicles winners continue... Rookie of the Year belongs to the man with the best flat top in soccer , Warren Creavalle.

Share All sharing options for: 2012 Dynamo Theory Creamsicles: Warren Creavalle is Rookie of the Year!

The wait is over! The ballots have been submitted, counted, recounted, and are now here for your viewing pleasure. Dynamo Theory will announce the 2012 Creamsicles award winners one by one over the next 10 days, continuing with Rookie of the Year.

Rookie of the Year
Warren Creavalle (69%)

To be totally honest, this was probably an easy one for most voters. We only had three rookies, and only one had sufficient playing time. With that being said, the fact that Creavalle saw the field in his rookie season could have automatically handed him an award like this.

That's not how it played out though. Creavalle earned this and quite frankly I'm surprised he didn't receive all the votes. He stepped into a few situations when needed and played like someone with at least a couple years under his belt, not a 37th pick in the most recent MLS SuperDraft.

After impressing Dominic Kinnear in a preseason trial, he did enough to earn a contract. Then, through hard work on the training grounds, Kinnear felt the 22 year old was ready for prime time.

Creavalle saw action in 11 MLS regular season games, starting in five. Kofi Sarkodie, who was a highly sought after college prospect the previous year, saw less action in his rookie year. That should tell you how much promise Kinnear sees in the young rookie. In addition, Creavalle started and played in all nine Reserve League matches, and added a US Open Cup match and three CONCACAF Champions League games to his resume. Talk about a successful kick off to his MLS career.

Brian Ownby showed some life off the bench in a few matches in 2012 (played in 7 games), but was never able to break into the squad regularly. Colin Rolfe had three goals and an assist in the Reserve League, but never made an appearance on the senior roster. 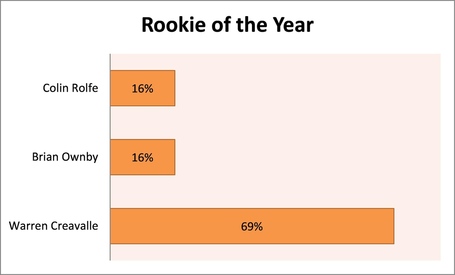 "Creavalle had a number of shining moments in 2012 and left Dynamo fans wanting to see more. He's a versatile player and a hard worker - exactly what our fans demand. Expect big things in 2013."

"I almost didn't give this vote to Creavalle. Not because he doesn't deserve it - he does - but because he shaved off the high top fade that we all grew to love and admire. Despite the fashion mistake, Warren made the most obvious impact on the team this year. While Ownby showed flashes of excellence in burn time this year, we still need to see more from him to be sure of it. Creavalle seized his opportunity, and that's why he's my ROY."

"Had Ownby not been injured this might have been closer, but Warren C had this locked down since early."