2012 Dynamo Theory Creamsicles: Boniek Garcia is Newcomer of the Year!

The Creamsicles winners continue... Newcomer of the Year adds a second Creamsicle to our smiling designated player, Boniek Garcia.

Share All sharing options for: 2012 Dynamo Theory Creamsicles: Boniek Garcia is Newcomer of the Year!

The wait is over! The ballots have been submitted, counted, recounted, and are now here for your viewing pleasure. Dynamo Theory will announce the 2012 Creamsicles award winners one by one over the next 10 days, continuing with Newcomer of the Year.

Newcomer of the Year
Boniek Garcia (72%)

Boniek Garcia took this award easily, and rightfully so. Dominic Kinnear is a mastermind when it comes to getting the most from his roster moves, but the addition of Garcia seems to be his best move yet. Garcia won the Creamsicle for Midfielder of the Year a couple of days ago, so this just adds to his collection.

This award is voted by you the fans, but ultimately Garcia should have also won the MLS Newcomer of the Year award also. He was beat out by the Columbus Crew's Frederico Higuain in late November. I'm sure he would've liked the MLS award, but a Creamsicle is just as nice... right? Right...?

Ricardo Clark was the other addition to the club that really impacted their run to the playoffs, even though it seems a bit odd to think of him a newcomer. Giles Barnes definitely gave Dynamo fans the desire to see him on the field more, but didn't see sufficient playing time to gather any steam in this category.

Garcia now has two Creamsicle awards to his name in 2012 and is up for the Most Valuable Player in the coming days. Could he score the hat trick of Dynamo awards? 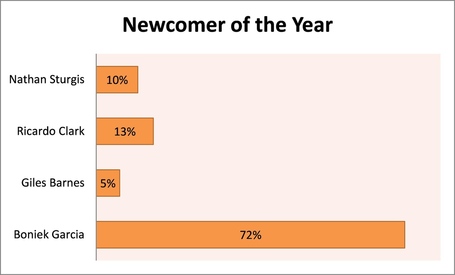 "Are you down with OBG?"

"When Boniek joined the team midseason, we were struggling. Immediately he breathed life into a stagnant offense. He's creatively and work rate was unparalleled and he needed no adjustment period to become one of the best players of 2012. I wouldn't be surprised to see Garcia as our MVP next year after having a full preseason and year in orange."

"This isn't even a fair match-up. Boniek, our beloved DP, has proven he is worth every cent. His passion is contagious. He is all over the field, and constantly tracking back to help on defense. He has the energy of the Energizer Bunny. He is exactly what we want from our DPs."

"The only reason Boniek doesn't get my vote for team MVP is because he hasn't been in Houston all season. His arrival sparked something in the team, and he helped the team to a second straight MLS Cup final. Boniek's appeal, to me, starts with a simple fact: he plays with a joy that is so much fun to watch."