The wait is over! The ballots have been submitted, counted, recounted, and are now here for your viewing pleasure. Dynamo Theory will announce the 2012 Creamsicles award winners one by one over the next several days, continuing with Better Playoff Theme.

For years, Dynamo playoff time was defined by three words - Dream, Scream, Believe. It started that way in 2012 too, until a moment in the one game playoff against the Chicago Fire. As the TV cameras captured a couple of moments where the Dynamo celebrated near the handful of travelling fans, one of them was holding a peculiar sign. There are many myths about where this sign came from, who was holding it, and what it meant - but the only facts we can report today is you (the fans and readers of Dynamo Theory) have voted "Noodle Time" as the Better Playoff Theme for the Houston Dynamo.

The signed made it's debut appearance in Toyota Park for the first time, was snapped in a photo with defender Andre Hainault, and even ended up make an appearance in the Today Show background.

While Noodle Time gathered the majority vote, most fan comments didn't seem to support the now famous sign, with many fans just never understanding the concept. I'm not sure if Noodle Time will ever be understood, but for 2012 it has upset a seven year playoff tradition in Houston. Move over Dream. Scream. Believe. - it's Noodle Time. Whatever that means... 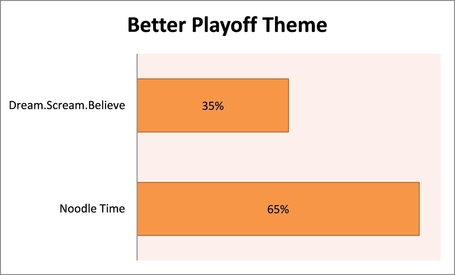 Here are some comments taken from the surveys about fans respective picks:

"Come on. Noodle Time! took off out of nowhere and became the fan-favorite playoff theme within a very short timeframe. For all the work the team put into Dream. Scream. Believe. which has been the de facto go-to for playoff runs of late, Noodle Time was grass roots and I have a feeling it is here to stay."

"Just because the Noodle Time! poster was on the Today Show. That was awesome."

"When preseason training begins, we begin to dream. We scream all year long, and continue on the road in the playoffs. We always believe we have a chance to lift the MLS Cup each year. This was a no brainer; I'm not falling for a stupid sign that has nothing to do with Dynamo history. Even if it found it's way to the Today show (which I admit was cool)."

"Stability. The Noodle Time thing was fun, and improvised brilliance, but it doesn't compare to an established motto. The fact that nobody could really explain the meaning also detracts from its appeal, in my view."

"Noodle Time seemed like an inside joke that most of us didn't get."

"OK - One is played out - the other was just weird. Can we please show some creativity here?"

"Noodle time? Seriously? That has nothing to do with the Dynamo! Ridiculous to put it here."