The Creamsicles winners continue... this time we start to highlight the goals that made us smile all year. Goal Celebration of the Year goes to none other than Calen Carr and his gravity defying leaps.

The wait is over! The ballots have been submitted, counted, recounted, and are now here for your viewing pleasure. Dynamo Theory will announce the 2012 Creamsicles award winners one by one over the next several days, continuing with Best Goal Celebration.

This was a fun category to vote for. All of these goals were epic and most of them were in games that mattered, but a few of the celebrations just stood out more than others. In the end, Calen Carr's celebration of throwing his helmet and jumping the corner flag takes the crown for 2012. We chose to show the best of them all when Carr had his shining moment in the MLS Cup (video below).

Carr may have won, but this was one of the closest votes of this year's Creamsicles. Boniek Garcia's joy after each of his goals gave it a run, but Carr's main competition was Colin Clark's penalty kick against Real Salt Lake where he headed towards the locker room after the game winning goal.

The DT staff voted unanimously for Clark's celebration for its sheer creatively and the timing when it took place. Nothing like slapping the other team in the face after stealing the full three points from them in the waning moments of the match, right?

Even so, Carr wins the 2012 Dynamo Theory Creamsicle for his gravity defying leaps over the corner flag. Easily one of the best celebrations in MLS soccer and I'm sure we're all on the same page with one thing - the entire Dynamo Theory staff and readers are all eager to see this goal celebration again.

So that means you gotta get well soon Calen! 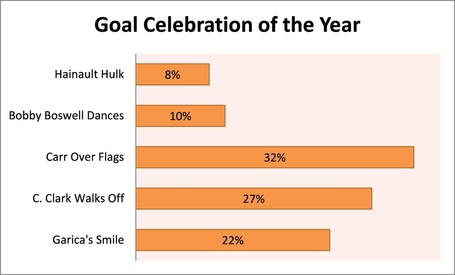 Calen Carr won this award fair and square, but what was incredible about the optional fan comments is not one person commented on Carr's celebration. Not only did the entire Dynamo Theory staff vote go for Colin Clark, the majority of fan comments praised the creatively behind the stoppage time celebration.

For that reason, we've decided to include the goal here for your viewing pleasure. Colin may not be in orange in 2013, but we'll always appreciate this goal and celebration.

"As much as I love the joie de vivre of Boniek's celebrations and Calen Carr's gravity defying leaps, it's Colin Clark's celebration that gets my vote. Why? Because even now, three months later, I still go back to re-watch it. It gave us a win, and it gave us laughs."

"Bobby's imitating the Dancing Bear in that celebration."

"Clark showed lots of mental fortitude in stepping in for Brad, who had recently missed his PK, and blasting the game winner in past Rimando. Then, if that wasn't rough enough on RSL, he left them standing alone on the field as he took a premature leave from the game. Simply awesome. I'll miss that guy."

"Colin Clark wins for his originality. Most of the players dance around and have some thing we are used to seeing. This was unexpected and hilarious. For me it was made more special by his bald head from the Bald is Beautiful campaign the players had recent shaved their heads for."

"I had trouble with this one. Calen Carr's celebration has become one I look forward to seeing. I want him to score goals not just because they help the team, but because he always leaps the flag and it is awesome to behold. Still, Colin Clark basically putting the nail in the coffin in stoppage against RSL and then heading to the locker room was a celebration in the moment and simply beyond anything I have seen in a while in MLS. It was perfect."