The Creamsicles winners continue... we continue to highlight the goals that made us smile all year. Goal of the Year officially goes to the legendary Moffat rocket against Sporting Kansas City in the MLS Cup Playoffs.

The wait is over! The ballots have been submitted, counted, recounted, and are now here for your viewing pleasure. Dynamo Theory will announce the 2012 Creamsicles award winners one by one over the next several days, continuing with Goal of the Year.

Whether you were watching live at BBVA Compass Stadium or at home, Adam Moffat's shot against Dynamo rival Sporting Kansas City made you scream, HOLY..... well you get the picture.

This was one of those goals. You know the type - the one you're replaying on YouTube three years later because it was one of the craziest goals you ever witnessed. Dynamo fans have been lucky to witness Moffat do this more than once, but to do it in the MLS Cup Playoffs, at home, and against our biggest rival was priceless.

Brad Davis' blast in the opening game of BBVA Compass Stadium was right behind Moffat's shot in voting, but just couldn't close the gap. Even our staff vote was split between these two goals. Both are goals that will be remembered for a very long time, but when you see that Moffat goal - wow. Holy.... well, you get where I'm going with this. 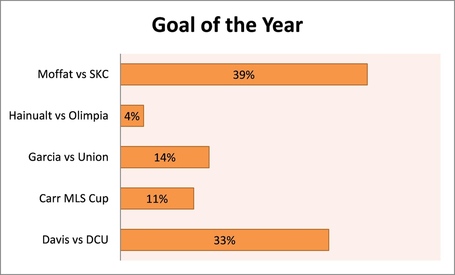 Here are some comments taken from the surveys about fan,s respective picks:

"Great Scot! How does Moffat hit that? That's a question I still have to ask myself whenever I watch his goal. It sparked the Dynamo to a 2-nil win in Houston and a 2-1 win on aggregate. Plus, it's pretty, and you can't argue with beauty."

"I'm picking this one for the sheer emotion inside the stadium that day. On the surface, it was a good goal - but if you were inside that stadium when it happened, it was a great goal. It was fitting that Davis was the first goal of the new stadium, even more it was a left footed strike from distance. The other nominees were great, but this one was special."

"Although Brad's first goal at BBVA will never be forgotten. Ever." (Vote for Moffat)

"No goal meant more to the Dynamo than the Moffat Rocket in the Eastern Conference Finals Home Leg. It was a goal of beauty, and was exactly what the team needed to press deep into the playoffs once again. The emotion, the exuberance, it all spilled over, and the boys seemed to loosen up. Also, I'll be damned if it wasn't good to see Moffat put it exactly where he needed to. BEAUTIFUL."