Both the U-18 and U-16 Dynamo Academy teams beat the Dallas Texans on Saturday on the road. With the win, both are leaders in their respective divisions.

While the Houston Dynamo first team is nearing the start of their season, the Dynamo Academy is in the middle of their year and both the U-18 and U-16 have positioned themselves nicely so far.

The Academy teams started an eight game road trip yesterday by travelling up to Dallas to take on the Dallas Texans.

The U-18's came into the match in second place behind the Texans so essentially it was a battle for the top spot in the Frontier Division.

Irvin Ramirez put the good guys up 1-0 in the 69th minute, his second goal in the last three matches. Midfielder Jose Rodriguez added an insurance goal in the 89th minute, his fourth goal of the season. Goalkeeper Josh Blair got the clean sheet for the Dynamo, who won 2-0.

With the win, the U-18's jumped into first place (10-3-3). Their stellar play has many taking notice, evidenced by their ranking in the top ten Academy teams by Elite Soccer. Yesterday's win was their fourth win in a row, and they're likely to move up the rankings.

The U-16's (12-3-1) defeated the Dallas Texans shortly afterwards 3-1. With the win, they moved into first place in their division as well. Midfielder Julius Montano put the Dynamo up 1-0 in the 20th minute, and an own goal from Dallas doubled the lead just six minutes later. Josue Palomino added an insurance goal in the 48th minute for Houston.

The U-16's have now won five games in a row, including their previous two games by scoring five goals in each. Christian Lucatero and Elochukwu Ozumba lead the U-16's in scoring on the season with eight goals a piece.

Both of the Academy teams have scored more team goals than their division opponents.

Next up for both Dynamo Academy teams will be Lonestar SC Academy on February 16th. In both age groups, Lonestar sits near the bottom of the table. The next home match for the Dynamo Academy won't be until April 27, so they have a long road schedule ahead of them. 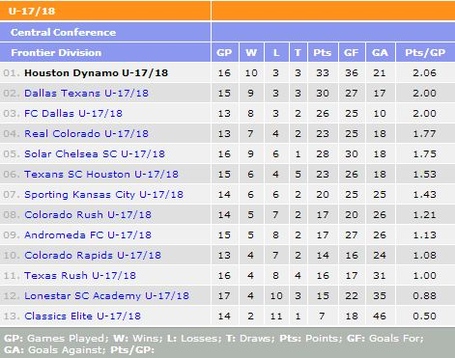 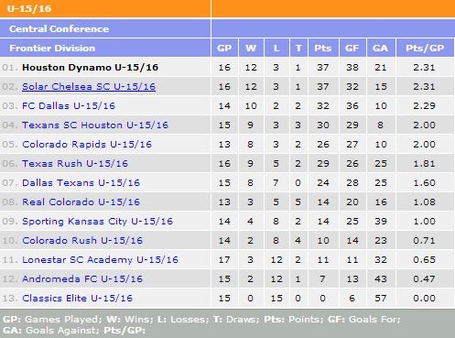