The Houston Dynamo open the 2013 MLS season on March 2, but just three days later will continue their quest for CONCACAF Champions League glory. Will Dominic Kinnear's offseason moves be enough to compete?

The quick turnaround gives the club little rest and time to prepare for such an important match. Santos is in full season form as the Mexican league is currently in the middle of their Clausura tournament. The Dynamo will likely look to a reserve heavy lineup to get a leg up on the Mexican club.

Contrary to many fan's outcries for taking the region's most important tournament more seriously, the Dynamo have historically fielded more reserves than regular starters. In fact, in the 2012-2013 CCL, Houston has relied on their reserve players to get them this far as their two leg match with Santos is in quarterfinal play.

With Houston's recent offseason moves, Dominic Kinnear fielding a heavy reserve squad could turn out just fine. The Dynamo have built upon an already solid core and have a good group of reserves that could very well compete for starting positions on many MLS teams.

That leaves Warren Creavalle stepping in for Sarkodie and Eric Brunner providing relief for Boswell and Taylor during the CCL run. At forward, Cam Weaver and Brian Ching are likely to be the regular starters, while Jason Johnson could see some time off the bench. The midfield seems the most interesting, as Kinnear has some impressive options. Whether it's Moffat or Barnes that gains the starting role, one of them likely will lead the midfield in the CCL. Houston's newest addition, English winger Andrew Driver, could play a huge role if he gels quickly with the team. Driver is in midseason form and shouldn't need time to pick up fitness. Homegrown player Alex Dixon has looked decent in preseason and appears ready to challenge for more playing time as well. 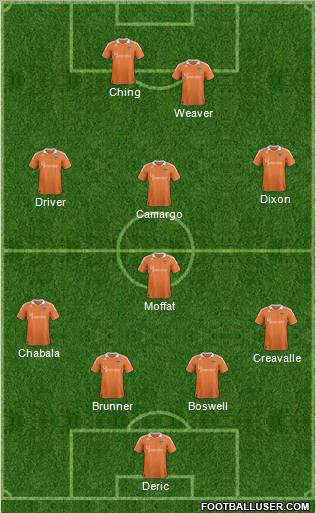 In the two lineup predictions, I'm assuming a traditional 4-4-2. With the additions to Dynamo squad this offseason, Kinnear will surely be able to switch up formations to tactically match up with opposing teams.

Santos is not a team to be taken lightly. Currently they are in contention to make the Mexican playoffs, and were crowned 2012 Clausura champions a year ago. While the team personal has changed a bit over the last year, the club still has two of the most dangerous strikers in Mexico with Herculez Gomez and Oribe Peralta.

What do you think? Does the Houston "reserve" squad have enough strength to take down mighty Santos and the teams that wait beyond?