After two hard-fought wins, there's a lot of praise going around the Dynamo camp. This DT writer would like to send some of that in the direction of Ashe and Sarkodie, as they will be instrumental to further success this season.

Well this has been an exhilarating week, huh? Two matches in the BBVA fortress, two wins, and tons of optimism swirling around the camp. After dropping DC United 2-0, your boys in Orange turned to Santos for the first leg of their CCL quarterfinal matchup. The 1-0 win isn't fabulous, but its nothing to scoff at either. In short, we've successfully navigated the first half of a busy two-week logjam.

The second half of this jamming of logs means a return leg at Torreon, followed by a match-up with our least favorite Southern Oklahoman foes. Looking at the more important of those two matchups (sorry I'm not sorry, Frisco), there is every reason to believe that the Dynamo can advance past a very talented Santos squad. Whether you're hoping for Bruin to find his scoring touch or Davis to put a better set piece into the box, there is plenty of room for both improvement and hope. While those are good points to focus on, I'm thinking there are two other guys that will be much more important to our success moving forward. First, as always, lets get to the science.

No, this isn't some weird fan fiction mash-up of what Osmosis Jones would have been like had it been produced by HBO or Showtime. Bacterial Sex is a very real thing, and it could be happening inside you right now.

What's worse is that this isn't just the sign of a rebellious bacteria, lazily getting its Barry White on. They're actually learning at the same time. Its simple - many bacteria have DNA that encodes the ability to break down the drugs we try to kill them with. That's what makes them resistant. As you can imagine, this is a very beneficial DNA sequence to have. And these bacteria, ever the socialist, will share this information with their friends through conjugation. One secretes pheromones that convinces another to hand off the DNA sequence encoding the drug-busting capability. It's called conjugation, but bacteria sex is just way more catchy.

Back to the Soccer...
The formation employed by Santos (4-2-3-1) allowed them to concentrate all of their attacking prowess up front in a balanced attack. However, it left them susceptible to attack on the wings. Their lack of width (albeit on a narrow field) left room for OBG and Creavalle (and later, Davis) to move out wide. However, our offense continued to hit a road block in transferring that width advantage to attacks up front.

This is where my borderline inappropriate comparison of soccer to microscopic sex comes into play. The formation we employed, coupled with the runs made by Davis and OBG, effectively opened up the game for Sarkodie and Ashe. Stated another way - Davis and OBG transferred the key to breaking down the SL defense to our outside backs - much like in bacterial sex. To my female readers out there, you're welcome for that mental image.

Here's how:
First, the movement of the wings inside during an attack opened up an insane amount of space for our fullbacks up the field.

Both got forward into the attacking half throughout the match. Sarkodie, in fact, spent more time just on the offensive side of midfield than he did anywhere else. What I like to see with both heat maps is an arcing in towards the opposing box - most prominent in Sarkodie's movement.

This space to move forward allowed both to get dangerous boxes into the box. As we know, one of these led to Davis' winning goal. 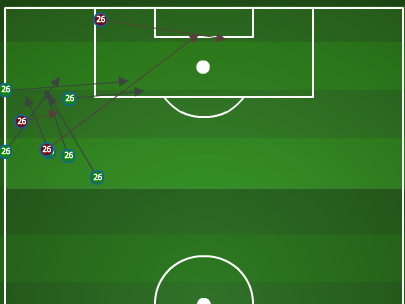 Here are Ashe's passes in the attacking third. Sarkodie's is similar, just a little boring. What excited me about this one is that 50% of the passes into the box were unsuccessful. Granted, that's not exciting for the last match, since better passes could have led to a bigger 1st leg advantage. What I mean is that he's getting a lot of opportunities to put balls into the box, and given more opportunities his crosses could find an awaiting finish.

The next leg in Torreon will be wildly different from the first. Santos will have a significant amount of possession, but like many of us have already said - the Dynamo realistically need one goal to advance. That goal will come from one of two sources - counterattacks down the wings, or set pieces. Based on the space Ashe and Sarkodie have found along the sidelines, coupled with this new key allotted to them by OBG and Davis, my money is on Ashe leading to the winning goal in Torreon.

My thanks to the HPD
A week ago, I exited BCM and walked towards the bike racks outside the main gate. Unfortunately, in the 7 hours I had spent inside the building, someone had found enough time to cut the bike lock in front of cameras and leave with my ride home. That was a downer.

Having been raised in a culture that is relatively jaded when it comes to the police, I wasn't expecting much. In fact, a few hours later I was resigned to my bike-less existence. Sure, I reported the theft, but I've seen Superbad, I know there's nothing cops can do.

Low and behold, 4 days later they found my bike at a pawn shop, and yesterday I retrieved my sole means of transportation. So I just wanted to say a quick thanks for the top notch detective work done by HPD.