Soccer Science: Shock to the Heart

It took me three days to emotionally get over the loss to Frisco. In an attempt to stave off depression, let's look at the bright side to Houston's 3-2 loss: Andy Driver's emergence as our super sub extraordinaire.

Share All sharing options for: Soccer Science: Shock to the Heart

It's extremely difficult to watch a soccer match in front of your in-laws. It's even harder to watch a 3-2 loss to Frisco without shrieking any unforgivable obscenities, but such was my gameday experience this past saturday. To defend against any wife-humiliating outbursts, I split my time between med school flash cards and a stream of the game. This inevitably limited my exposure to the game.

Thus, the first half was a blur, but coming out of the break I started to watch in anticipation for the inevitable breakthrough. What awaited me, however, was ugly ugly soccer: frantic passing, ill-advised kicks up the field, and no organization or flow. It was dreadful. We were dying an agonizingly slow death in the cesspool of Frisco, suffocated by our own impatience.

Then, Andy Driver walked onto the field.

I promise, I am not using Automated External Defibrillators as an example because of Driver's initials (His middle name is David, which doesn't work anyways, but you may find that interesting).

An AED is an essential step in the "Chain of Survival" during cardiac events. For example, if someone suffers a heart attack, survival depends on 1) early recognition of the attack 2) early CPR 3) early AED and 4) early arrival at the Emergency Room. AEDs are found at most public places, and are wildly simple to use. Certified AEDs are tested with kindergarten-age children, to ensure that even they could use it if need be (it talks you through the entire process).

During a heart attack, the rhythym of contraction is stuck in an abnormal state. It can just be beating too fast to work properly (V-Tac) or it can be beating in a completely unorganized manner (V-Fib). When you use an AED, the machine is able to recognize these two rhythyms, and fire an electric current through the heart - essentially giving it a jump start - allowing it to return to a normal rhythm.

(This has been a public service announcement from CdC)

Back to the Soccer

Like I said, the play in the beginning of the second half was both frantic and unorganized, just like a heart during a heart attack. We were keeping possession okay, but when it came to the attacking third, we were floundering. 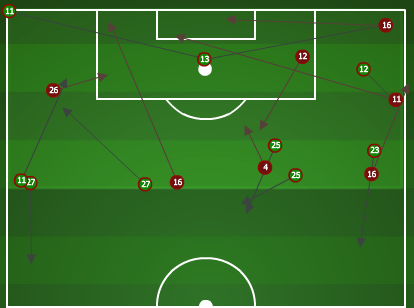 While this figure shows an 8 to 7 advantage in successful passes, many of those are going backwards. More importantly, only two passes into the box reached a Dynamo player.

When Driver came in, this trend stopped. Like the AED, Driver shocked the Dynamo offense into a successful rhythm - with passes completed at a much higher rate (18 to 6). 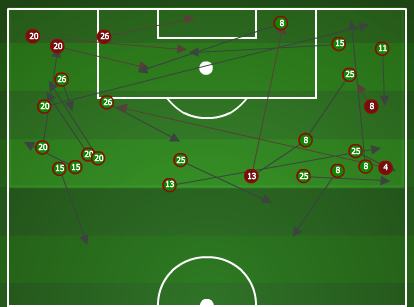 While there were still a few unsuccessful passes into the box, the sheer magnitude of chances created turned the tides for Houston. Driver, along with Ching and Weaver, pressed the FCD defense and turned possession into opportunities. Our team was finally clicking.

All in all, Driver put together an extremely respectable 30 minute shift for the men in orange. 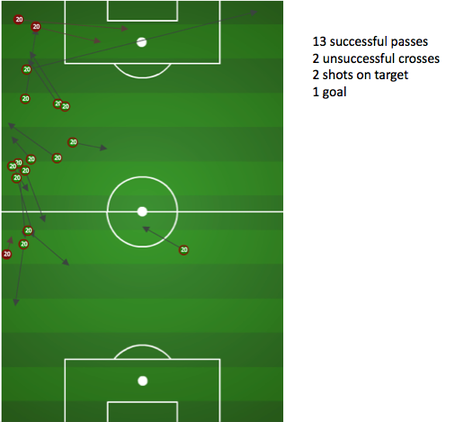 While the goal he scored is what everyone will focus on (rightfully so), its his role in Davis' equalizer that I want to highlight. Here's the sequence of events that led to the second goal.

First, Weaver won a ball in the air that fell to Barnes, who quickly turned up field (note Driver behind the play, the furthest Dynamo player from you in the center).

Weaver breaks between the two FCD defenders, and Ching plays the correct through ball, rewarding the run. Again, Driver is still behind the play, the furthest away from you - but he's catching up.

Weaver receives the ball in stride, and plays a ball backwards towards the trailing Dynamo players. Wait, who's that blonde streak on the far left? Driver has stayed with the play and is attempting to beat not only the much closer FCD defender, but their keeper as well.

Oh! Driver just misses out on a touch ahead of the keeper... 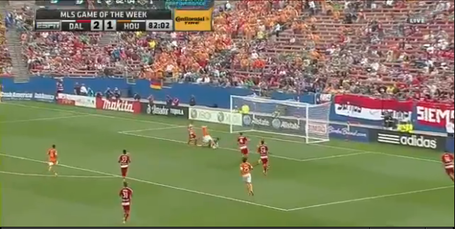 ... but as we all know, Davis followed the play brilliantly, and capitalized on the keeper's mistake to even the match at 2-all. Hold on... what's that?

Yes! Following his half-field sprint from behind the play, Driver streaked past a defender and the keeper to get a touch on the ball, thus forcing the mistake that led to Davis' goal.

It's moments like that where Driver's instincts, and more importantly match-fitness, enter the fold. In two simple plays, Driver took advantage of a sleeping FCD defense to pull Houston back into the game. While we inevitably conceded the winner to Thierry's understudy... Kenny's right hand ... Flopapotamus ... Cooper, it should not take away from the strides (both physical and in game day impact) made by Driver. He probably won't break into the starting XI anytime soon (although count me as one who would love to see that), but look for Andy to become a regular fixture off the bench - providing the necessary shock to our unorganized system when it needs it most.