Houston came into Portland on a wave of optimism following their record-tying win against San Jose. With the rhetoric out of the camp purporting a "playoff-like" approach to the match, this writer was expecting the best out of an (albeit injury-limited) squad.

Share All sharing options for: Soccer Science: A Bad Trip

Coming into Portland, the feeling exuded from the team can only be described as business-like and optimistic. After all, they just tied RSL's home win streak, beating last year's Supporter's Shield-winning San Jose 2-0. Davis called for a "playoff-like" approach to beating Portland, and I personally was expecting a win. Yes, Bruin was out with an injury, and yes, OBG was a surprise scratch after picking up an ankle knock, but the insertion of Driver and Weaver into the Starting XI did little to dampen my hopes. I was ready for ecstasy, but after the 2-0 Ryan Johnson Show, the night could only be described as:

There was a young heroine dealer and addict in the 1980's that, after using a batch of homemade heroine, noticed a muscle weakness in his legs. As he continued to shoot up, the weakness moved up to his arms, and he began to experience tremors before finally making it to the emergency center. Doctors were baffled as he and multiple 20-somethings started showing up across the city with the same symptoms - symptoms consistent with Parkinson's Disease. The connection between the Parkinsonism and heroine was finally made after they got the young patients to admit to intravenous drug use. The doctors then realized that this homemade heroine was actually MPTP, which selectively kills off cells in the substantia nigra (a fancy latin term for "black stuff") of the midbrain. Essentially, it kills off the portion of your brainstem that makes movement possible.

To avoid being a complete pessimist, there is a bright side to this story: these unique patients have been used to develop countless therapies for Parkinson's that are used today. You can read more about them in the linked article above, but the major one is targeted Deep Brain Stimulation, which works, but no one knows why. Neat-o.

Back to the Soccer

So, where we expected the Dynamo to come back to Houston on a high, they are instead reduced to a crawl. However, with a potentially record-breaking home match against Chicago on the horizon, there is a need to turn the most recent result around quickly.

There are a lot of reasons for the admittedly terrible performance against Portland. Wet turf. Injuries. Referee. Smoke bombs. Jupiter's position relative to Orion, etc. Stephen covered most of the (legitimate) reasons for the loss earlier this week. Essentially, everyone sucked, and injuries did have a lot to do with it. More than anything else, however, I'd like to suggest that it was our handling of the injuries we suffered, as opposed to the injuries themselves, that led to our loss. Namely, it was the midfield duo's peculiar necessity to force the ball to Driver as opposed to playing the field evenly.

Here are the passes completed by Rico and Moffat in the second half: 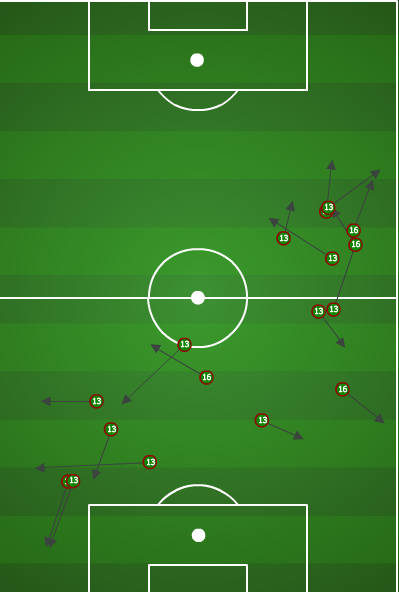 Note the steady trend from lower left to upper right. They were fine distributing the ball to Davis' side when we attempted to build from the back up, or just when we were holding possession in the defensive half, but when it came time to attack through the midfield they always chose to move to Driver's side. I understand the idea that Driver is a more immediate offensive threat than Davis - meaning that he will beat a man and go at goal himself - but with plenty of time left, was there a need for such urgency? In my mind, this game plan is best suited for Driver as a late sub, not as a starter. Its not sustainable. Heres why: 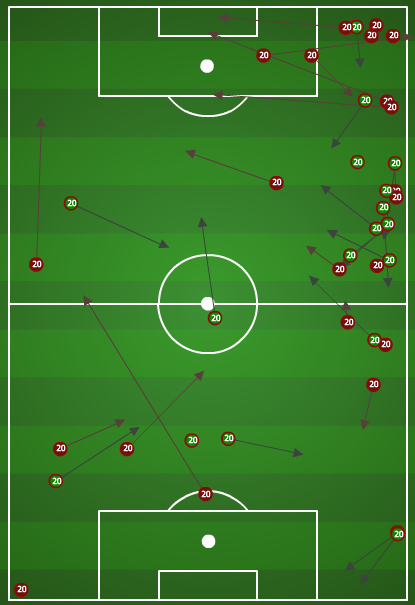 It just wasn't working. Every facet of Driver's game was being shut down on the right side. From my own recollection, the only big chance created was the early cross that Weaver fluffed over the ball. Still, throughout the match and into the second half, we consistently forced the ball to Driver's side of the field, hoping for his spark to ignite an offensive attack. Unfortunately, it just wasn't happening.

Above, I implied that it was a game plan flaw that forced the play towards Driver as opposed to balancing the attack with Davis. Let me qualify that - I don't think Dom would ever realistically push the game away from his best player. I just think that the midfield duo of Rico and Moffat were unsettled by the high line of pressure brought by Portland. Driver's speed allowed him to find space for the ball, but led him to bad spots. Trapping him on the touchline, forcing him to dribble at the defender, etc. There just wasn't much in terms of cohesive attacking options through Driver.

Let me propose that Driver, in a starters role (so this probably won't be relevant for long), would be best served drifting inside more than attacking on the wings. Open up Ashe or Sarkodie behind him for overlapping runs as a wide threat, while keeping Davis on the opposite side as the true winger. Let Driver go at people, but give him 360 degrees to work with as opposed to trapping him on a wing and removing 50% of his space. 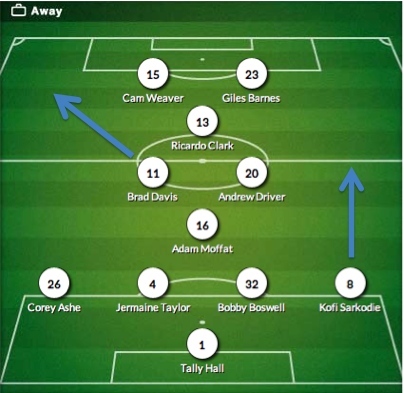 Moving forward, OBG will return and Driver will find himself back on the bench. With about 15 minutes to work with on a weekly basis, his all-or-nothing attacks will be appropriate for breaking down tired defenses. However, as was stated above, that type of approach is just not sustainable for 90 minutes.

The loss to Portland was unfortunate and unexpected. We fans did not get the ecstasy we were expecting from the trip - instead welcomed with a dour 2-0 loss to the 6th best team in the West. However, the season is young, and a wonderful home date with Chicago could be the perfect jolt to our system. After all, they helped us get off on the right foot in the playoffs last year...