With Sunday's 2-1 win over the Chicago Fire, the Houston Dynamo moved past RSL to set a new MLS record for unbeaten matches at home. The coach and players may downplay the feat, but I'm here to tell you it's a big deal - and it's all for the fans.

We all know it's difficult for anyone to win in Houston - that's been established. But just how good are the Dynamo in the comfort of their own heat? Well, as of Sunday afternoon, they've staked their claim as the best.

With Sunday's 2-1 win over the Fire, the Dynamo cemented their name in the Major League Soccer history books with their 35th consecutive unbeaten match in all competitions at home. The win broke the previous record held by Real Salt Lake.

The last time that Houston fans witnessed their men in orange walk off the pitch in defeat was on June 18, 2011. That's a ton of time from then until now - and they're not done yet.

Where does this accomplishment rank in terms of importance for the club? How much does and should it mean to the organization, the players and technical staff, or the fans?

During the buildup to the match, coach Dominic Kinnear downplayed the feat and emphasized the team doesn't get rewarded with trophies for not losing at home. While I can see where he's coming from, the feat in itself is an accomplishment worth acknowledging... and moving past. After all, the coach and the players do this week in and week out and naturally are more concerned over the big picture - points that equal playoffs and a run at a title.

As for the organization, it's another selling point to help market this championship caliber team. There isn't a better time for the organization to be all over this type of streak in terms of promotional videos and ticket packages than right now. After all, there are still two sports teams with a longer streak in home performances, and Houston is close to being able to challenge those as well.

A record like this is more about the fans - something to brag about and trash talk with opponent's fans leading up to a match.

It's about the toughness that the Houston Dynamo play with day in and day out - something we in Houston call the "Dynamo way."

It's hard to find a team with a better connection to their fans than the Houston Dynamo.

Take a look at the 2012 MLS Conference Finals. A tale of two teams - the Los Angeles Galaxy and the Dynamo. Each won their respective conferences, but each one celebrated very differently. The star studded Galaxy won the West, accepted the trophy, and walked off the pitch with a "We came for the MLS Cup" mentality.

The Dynamo on the other hand, did something that is rarely (if ever) seen in American sports. They celebrated the moment on the Eastern Conference Championship stage - but then headed straight to the travelling supporters. Few MLS clubs travel better than Dynamo fans, especially when hardware is on the line.

But... there is a reason. That reason is what the MLS world witnessed that day. Not only did the Dynamo players walk over to the fans, they climbed in the stands and enjoyed this moment WITH the fans, not in front on them. No simple claps and applause from the pitch as they looked up at the supporters - instead high fives, hugs, and pictures right next to the orange fanatics and with the Eastern Conference trophy.

The Galaxy may have won the MLS Cup in front of their home fans, but even in the Home Depot Center orange nearly stole the show in the stands (and on the pitch). Had that game been played at BBVA Compass Stadium, the outcome surely could have been different.

BBVA Compass Stadium: A Look Back 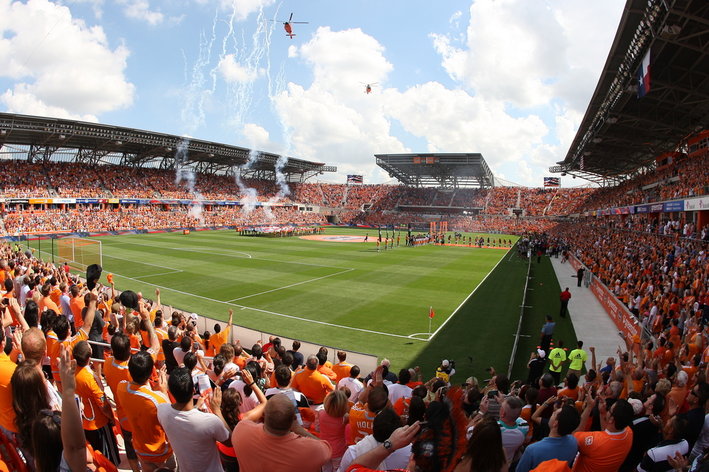 Managing Editor Ordinary Orange Fan takes a look back at the inaugural season of BBVA Compass Stadium, discusses the Dynamo's dominance in Houston, and gives you his favorite moments at the Dynamo's new home.

This unbeaten streak at home can only be described by one word - remarkable.

After the match, Dominic Kinnear told the press the secret was simply, "We have a good team." He continued to talk about the consistency around the players efforts and said the record wouldn't have been accomplished had the team not been as good as they are.

That is true - but a simple answer for a complicated "How do they do it" question.

I'd like to think the real answer lies simply in the character of the team I described above. That connection to the fans - which I would argue with anyone, is the best in MLS. That's the secret to the success of the Houston Dynamo at home.

Each and every home game, this team takes the field with pride and a desire to avoid disappointment for the people who have stood by their side from the start.

This city welcomed a team from California in 2006, and Brian Ching welcomed and rewarded the fans with an incredible four goal performance in the first match ever played.

The fan support grew and multiplied quickly, the city began embracing the color orange, and the team responded by bringing back to back championships to Houston.

Through years of legal battles and political arm wrestling, the fans chanted "Where's our stadium" in support of their Orange Crush. That dream became a reality and both fans and players were rewarded with one of the nicest sports venues in the United States.

All that has spoiled us a little - and I hope that never changes.

In the end, the players are the ones that really have made the difference. Since 2006, countless players have dedicated themselves selflessly to charitable causes, being role models, and I've never seen a player turn down an autograph or even a casual conversation.

Each and every home match that approaches, I'd like to think the Dynamo players walk out of that tunnel and a couple things run through their mind.

As they start their journey down the tunnel, each one glances above and reads that motto hanging above the walkway - Our Heat. Our Heart. Our Home.

As they walk down the dark tunnel and that light of the exit and pitch become visible, the chants of the supporters and rattling of the bleachers reminds them who is waiting on the other on the side of the that exit.

And a thought goes through their head... Another home game. Listen to those fans, they love us so much and we love them back. Time to send them home happy again because they absolutely deserve it.

So here's to the Houston Dynamo. We know you won't make this a big deal because that's the Dynamo way, but we (the fans) appreciate the streak and can't wait to add to it.