The Dynamo are highly successful at home, evidenced by their record setting match last weekend. Road play however has been extremely poor and Houston will be looking to turn around those results on Saturday when they visit BMO Field to face Toronto FC.

Share All sharing options for: Houston Dynamo vs Toronto FC: Odds and Ends

As much as some around MLS are tired about hearing about the Houston Dynamo's dominance at home, most here in Houston are tired of talking about the Dynamo struggles on the road. On Saturday afternoon in MLS' first match of the weekend, the Dynamo will have another shot at brightening their road record when they travel to BMO Field to face Toronto FC.

Houston (4-2-0) sits in third place in the Eastern Conference with 12 points, but all four of their victories were claimed at BBVA Compass Stadium. Their two matches played on the road have both resulted in losses.

Toronto (1-2-3) has only won one match thus far and sits in seventh position in the East with six points. They are coming off of three straight draws and will be looking to get back on the right track.

The Houston Dynamo are coming off a historic 2-1 win over the Chicago Fire, which gave the orange a new MLS record for unbeaten matches at home. The Dynamo got out to a nice start to the match in terms of possession and chances, but the Fire quickly adapted and the match was pretty even overall. Brad Davis' game winning goal was more of a defensive lapse than anything else, and the Fire probably should have escaped with a point rather than a loss. 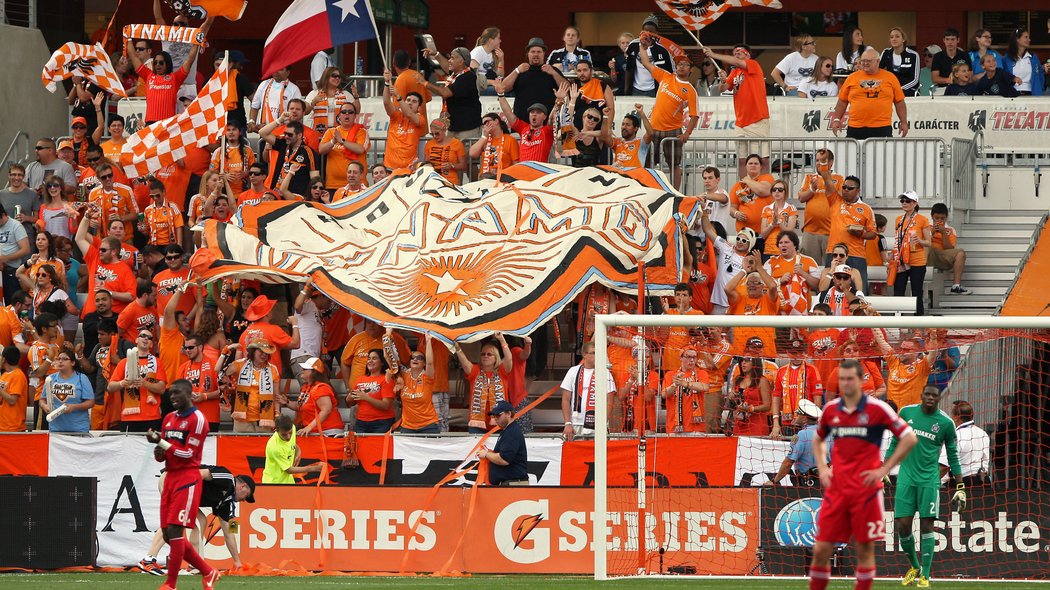 Houston continued their trend in terms of lineup and formation against the Fire. Will Bruin made his way back into the lineup after missing action with a hamstring injury, while Giles Barnes was again his partner up top. Barnes' play has been stellar for the entire season and he's looking to make move waves as the season progresses.

Midfielder Boniek Garcia sat out of the match, but Andrew Driver stepped in for a solid performance and gave the Chicago defenders difficulty most of the afternoon. If Garcia is rested Saturday (he did practice on Thursday), Driver will get the start on the right again. Having Driver available to fill in on the right or left side of the midfield will prove to be a big part of the Dynamo success in 2013 due to injuries or National Team call-ups.

As I mentioned, Toronto has now had three draws in a row, the latest at the hands of a late goal by the Philadelphia Union's Jack McInerney. Toronto scored their first goal in the 71st minute when Robert Earnshaw got behind the Union defense and chipped the keeper.

As our friends over at Waking the Red stated in their post match coverage, Toronto has struggled with allowing late goals and this game was no different. In stoppage time, the Union attacked Toronto with everything they have and were finally rewarded with the tying goal in the 93rd minute.

With Houston's history of success in scoring late goals, this could be a key point that Dominic Kinnear focuses on leading up to the match. If Toronto starts to lose their legs or their focus late, the Dynamo would move in and would love to capitalize on that.

Two Key Points - It's All About the Strikers

Robert Earnshaw - with last week's goal, Earnshaw now shares the MLS lead in goals scored with 5. How Bobby Boswell and Jermaine Taylor handle the striker will be key - this guy knows how to find the back of the net.

Will Bruin / Giles Barnes - This partnership up front is right on the edge of blossoming. The two forwards have combined for four of 10 goals scored by Houston so far in 2013, but there is a feeling these two could explode in the coming matches. Barnes' play continues to be praised week over week, while Bruin has already proved his worth in Houston and in MLS.

Historically, the Toronto vs Houston matchup is pretty even. In 13 total matches, the Dynamo have won four, lost three, and six have ended in a draw. Houston has done slightly better in scoring production, coming in with a +6 (19-13) goal differential in the series.

At BMO Field, the Dynamo have struggled (imagine that). In six total matches, Houston has only claimed one victory, lost twice, and ended the match even three times. Something good to take from the road record is that single victory actually occurred last season in July. The Dynamo finally got their first victory in Toronto and should be able to build off of that confidence coming in to Saturday's match.

In 2013, the Dynamo have played six total matches with two of those on the road. In all matches, the Dynamo have averaged 1.67 goals per game, while conceding 1.17. When you look at their two road losses - it's an entirely different story. Houston has averaged 1 goal per game, but have conceded 2.50.

The first road match was the 3-2 loss at Dallas, while the second match was a 2-0 loss at Portland. In the Dallas match, poor defense on set plays and a helping hand (I had to) led to their defeat, while a dismal second half against the Timbers doomed the orange.

What are your thoughts on the road woes, the Dynamo's chances vs Toronto, and what you're expecting Saturday?