Major League Soccer Fantasy for the 2013 is underway and chugging right along, and this week we bring you a league-wide update so you know who to console and who to rib hardest. (Here's a hint: That would be me)

Share All sharing options for: MLS Fantasy 2013: What round are we in now?

By now I am sure most who follow me, Dynamo Theory or any of the Dynamo Theory Staff on Twitter know I have been out of commission for the last few weeks due to some family circumstances well outside my control. Fear not, my friends, for I have returned with a vigor renewed! I realize we missed many weeks of updates due to the aforementioned circumstances, but I bring to you what I can only hope will quench your thirst for updates by offering a complete league rundown.

The last few weeks have seen numerous players become fantasy stars, and everyone wants to know who the best fantasy point producing players have been. I mean, heck, I could sure use some of them myself. In the interest of fairness, I am including the top three goalkeepers thus far, and next week we will continue through the formation to talk about the top five Defenders.

It serves to reason the Keepers with the highest point totals for the season so far would be those on the teams with the best records and most clean sheets.

Unfortunately, the team who finds themselves at the top of the heap right now is none other than the jackals from Southern Oklahoma, and along with them the highest scoring keeper to date, Raul Fernandez. Fernandez brings 4 Clean Sheets and 23 Saves in his 7 Starts while conceding a mere 7 Goals, which accounts for a Fantasy Point total after 8 weeks of 46 points. That may not seem like much, but for a Keeper, 46 points is pretty solid. And that makes me weep.

Even more unfortunate is the Keeper who sits in second place in total Fantasy Points. Damn you, Puma. Jimmy Nielsen has 8 Starts (2 in round 8 actually), boasting 5 Clean Sheets along with 15 Saves while allowing only 5 Goals for a Fantasy Point total after 8 weeks of 44 points. Puma is right there alongside Fernandez, and really the major difference is the Kansas City defense not forcing Puma into making many saves.

The Keeper who currently ranks 3rd in Fantasy Points through the first 8 weeks is Nick Rimando from Real Salt Lake. Rimando has started 7 of his teams 8 games this season, managing only 2 Clean Sheets while conceding a mere 5 Goals. Where he excels, however, is in his total Saves at 28. He also managed a Penalty Save against Chivas USA last week, which brings his total Fantasy Points to 43 putting him a mere 1 point behind 2nd place.

Seeing as how I bleed orange through and through, I wanted to mention how our beloved Tally Hall is faring in the Fantasy Rankings. Right now, Hall finds himself tied for 12th with a total of 33 Fantasy Points. He is suffering from a suddenly porous defense, conceding 8 Goals and only notching 2 Clean Sheets with a mere 17 Saves. What makes Tally interesting from a fantasy perspective is his consistency. Tally has started all 7 of the Houston Dynamo matches this season, and he has no less than 3 fantasy points per match, actually averaging closer to 5 fantasy points per match. That may not seem like much, but over a fairly lengthy season that kind of consistency can win a team many, many games.

So enough with the players, how are teams faring? Well, before I step into the leaderboard, I want to congratulate DamagedGoods on having the only remaining undefeated record all the way through Round 8. At 7-0-0, DamagedGoods holds a massive 102 Fantasy Point lead over second place, Flood Domination. That is just seriously monstrous. Oh, and DamagedGoods isn't just avoiding losing, they've gone out there and WON every match thus far. Damn, that deserves a Kudos. 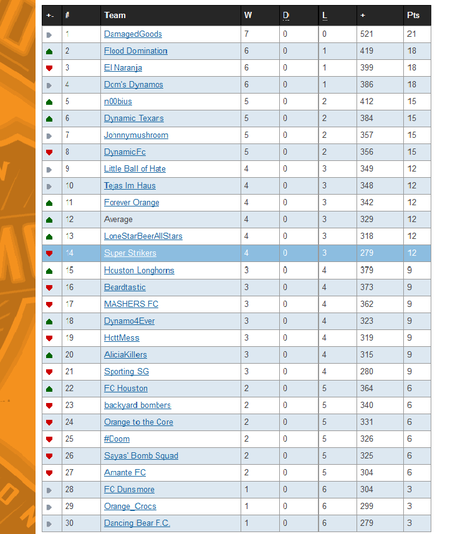 Also of note is how simply terrible I have been. While teams in the 14th slot shouldn't feel terrible about where they are in the standings, note how only one other team has as few points as I do (I am Super Strikers).

What about you all? How are you faring so far? Which of you is DamagedGoods?