Houston Dynamo vs Portland Timbers: After the dust settles, what remains?

The Houston Dynamo were handed a 2-0 loss at the hands of the Portland Timbers after a terrible second half performance. What went wrong, who's at fault, and will the road woes continue?

Share All sharing options for: Houston Dynamo vs Portland Timbers: After the dust settles, what remains?

The day after a loss is always tough. Was it real? What the hell went wrong? Is it the end of world? Why can't we play all our games at BBVA Compass Stadium?

In a nutshell... it was real, a lot went wrong, it's not the end of the world, and that last one is a stupid question.

Behind a Ryan Johnson brace, the Portland Timbers took care of business (aka the Houston Dynamo) and got their first win of the season. Well done Timbers.

This game was a tale of two halves essentially. The first half was a bit more balanced, with Houston getting a few good looks, missing a couple opportunities, but all was fine. Heading into the break 0-0 on the road is never a bad thing - especially when you're solid at scoring second half goals like the Dynamo are.

Injuries play a role for both clubs

The fact that Houston was playing without their star forward Will Bruin and designated player Boniek Garcia was one area of discussion. With Omar Cummings returning to full strength, Dominic Kinnear felt it was ok to rest him with it still being early in the season. The turf in Jeld-Wen wouldn't be easy on Cummings, so why risk it. Ultimately, it was a smart move. We often forget it is early in the season, and we have a long way to go. Cam Weaver got the call instead and put in a typical Weaver performance. Read into that what you will.

On the right side of the midfield, Andrew Driver was called upon in Garcia's absence. Once lineups were announced, there was a lot of positive buzz over his insertion to the starting lineup after his stellar performances in orange thus far. Unfortunately, the right side was not kind to him and he was largely taken out of the match.

While Houston had two starters out, Portland's first half could have turned into a disaster with injuries to two of their own. First, defender David Horst went down after landing awkwardly on his right foot while challenging Giles Barnes for a ball. The team reported a knee injury, but more specific rumors are floating around it's an MCL tear. Let's hope it's not as bad as some are saying - you hate to see an injury like that.

Not long after, Argentine Diego Valeri was taken off after a midair collision with Jermaine Taylor. Taylor's elbow caught Valeri in the cheek and it opened a cut under his eye.

These two early substitutions could easily rattle a club quickly, but Caleb Porter made some adjustments to his formation that ended up paying big dividends.

When the two sides went into the half locked in a scoreless tie, most Houston fans weren't worried and were optimistic about the second half. After All, even after Portland controlled more than sixty percent of the first half possession, Houston looked like they may have edged out the Timbers in quality play.

When Kinnear and the Dynamo came out of the locker room for the second half of the game, they midfield and defense may have stayed behind in the comfortable locker rooms at Jeld-Wen.

"I think they increased their intensity and we failed to match what they were bringing. Hopefully we get ready for that game well, and forget this one as quick as we can." -Tally Hall on second half

The midfield was completely shut down from any type of possession or creatively, while Portland's passing was crisp and fluid. The MLS matchcenter stats showed the Timbers out passed Houston 561-346, while maintaining an 83% passing accuracy. This is one reason that Houston's midfield couldn't get anything started and Portland was able to put pressure on the Dynamo backline the entire second half.

The Timbers finished the game with 61% of the possession, but the great thing about their performance is they were consistently doing something with the ball, not sitting back.

You have to hand it to Portland - they were the only team playing soccer in the second half and put on a nice demonstration of the term "domination."

The Dynamo defense leaked two goals - both of which Bobby Boswell was involved in. The first may or may not have been preventable. If you look at the replay, Diego Chara placed the ball perfectly. Boswell appeared to have his man marked, but the ball looks just out of reach of Boswell for clearance. Ryan Johnson made a perfect run and tapped the ball past Tally Hall (who did get a foot on the ball). 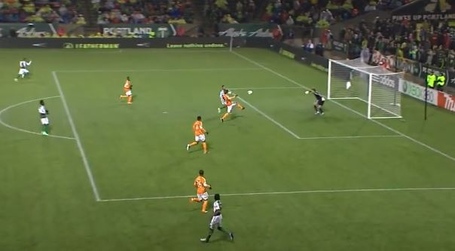 The second goal looked a bit more preventable. First of all, possession was lost by the midfield (again) and that led to a quick Portland attack. When Darlington Nagbe received the ball at midfield, Ryan Johnson took off. Instead of marking Johnson, Boswell made a poor attempt to step forward - either to try and intercept the pass or to catch Johnson offside. I don't think he stood a chance for the pass, so if an offside trap was in his mind, he was crazy. There was no doubt Johnson was onside with Boswell so much deeper than Jermaine Taylor in the back.

Here's Boswell's position when Nagbe passed the ball to Johnson. 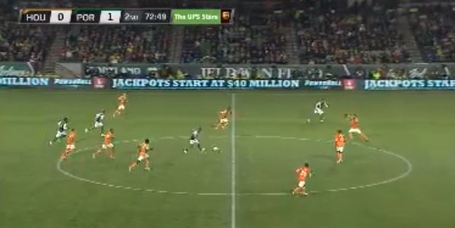 Now here's the head start Johnson has on the Dynamo defense because of the defensive blunder. 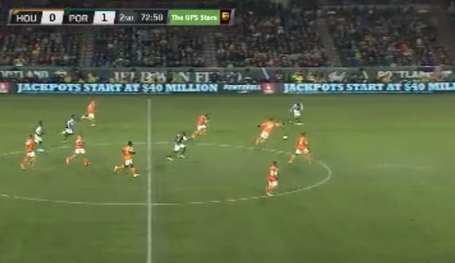 Easy to see why Johnson was able to put the dagger into Houston. I will add the shot was a quality finish as Johnson was patient and held the ball until Hall committed to going low before firing the shot into the top of the net.

First, Houston has to improve on their road performances. Two for two in road losses this year, and three if you throw in the Santos match. Sure the record at BBVA Compass Stadium is awesome, but a team cannot afford to be this bad on the road. It's becoming a joke at this point. 53% of their road matches were lost last year, which was the highest since their poorest season - 2010. No one wants a repeat of 2010, that's for sure. This year we're sitting at 100% on losses. Not a great way to start the season, but plenty of time to turn those results around.

The Dynamo midfield has been praised as our strongest asset in 2013 - starters with the depth behind them. Tonight proved that theory is a bit questionable. With only Honduran Boniek Garcia missing, Andrew Driver and Brad Davis were nearly nonexistent. Is Driver only effective on the left side? With Dixon and Ownby loaned to lower division clubs, have we exhausted all our options on the right side if Garcia has to sit?

Don't panic about our forward situation. It was a smart move for Kinnear to give Weaver the start over Cummings. After all, it's only the fifth game of the season. Cummings is nearing, and could already be at, full strength. No need to force him into playing on turf when you have others that should be capable of filling in. I'd expect Cummings to start in upcoming matches if Bruin's injury requires some additional recovery time.

While the Dynamo led many "power rankings" last week, this past weekend's game showed how quickly things can change. A dominating Houston team walked into Jeld-Wen field with high hopes, but left wondering what happened and what could have been. There were few positives to take from the match, but the good guys have a week to fix things before a tough Chicago team visits BBVA Compass Stadium.

"Hopefully we get ready for that [Chicago] game well, and forget this one as quick as we can." -Dominic Kinnear after match

I'm sure that plane ride home with Kinnear was... fun. Or not. Either way, if there is one thing about the orange fans have learned is they're resilient. After an unexpected loss, nothing gets you back on track like a good home cooked meal.

It surely won't be easy after Chicago comes into the game riding a high from their first win of the season. But the Men in Orange are pretty damn good at home. Game on.