In the age of soccer where a gust of wind, harshly spoken word, or tuft of grass can send players careening to the ground, its rare to see an attacker stand up in the face of a certain foul. However, this Wednesday Will Bruin did just that, and still managed to score. To celebrate this achievement, let's all take a closer look at what occurred in those dramatic five seconds. Note: This post is best enjoyed while read with a British accent, as are most things in life.

Share All sharing options for: A Dramatic Reading of Bruin's Second Goal

In the 78th minute of the match, with the Houston Dynamo leading DC United 2-0 at RFK Stadium, Brad Davis stood over a ball 25 yards from goal. Nearby, DCU's Rafael had situated himself at the corner of the 18-yard box, a mere annoyance to the oft-perfect free kick expert. Inside the box stood four orange-clad attackers awaiting the service from Davis. While sparse in number, their semi-comfortable lead meant less importance could be placed on this moment.

As is the case with most set pieces by the Houston Dynamo, there was an air of nervous anticipation coming from the home fans. In this instance, however, it seemed as though stadium itself sensed the impending threat. While imposing in both its historical and physical mass, RFK Stadium was left gaping by the sparse attendance. And, as The Screaming Eagles clustered closer and closer together, they revealed more and more of the 45,596 orange-tinted seats - foreshadowing the ultimate result of the match.

On cue, as Davis' muscles tensed in preparation for the impending kick, the Dynamo attackers began to swarm in the box. The Dancing Bear, Will Bruin, was of particular importance to the DC defense. Having already watched Bruin score once this day, Dejan Jakovic seemed determined to keep him in in check by any means necessary.

As the Croatian defenders hands sought to contain the attacker, Bruin raised his arm to signal his intentions. Much like Babe Ruth calling his shot, Houston's attacker seemed to disregard Jakovic's desire to keep him from scoring. 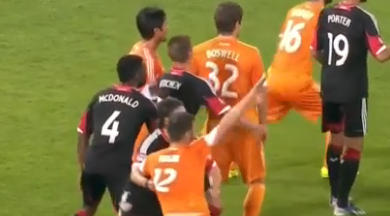 With Davis approaching the ball, Bruin broke goalward. While his size and quickness allowed him to get a head start on Jakovic, the defender's obstruction slowed him down. Jakovic, with the referee and sporting world watching, chose premeditative gamesmanship over a more noble pursuit of the game. As Bruin's #12 was deformed into the greek letter "Nu", a reasonable observer could expect the Dynamo forward to go to ground in search of a penalty kick. 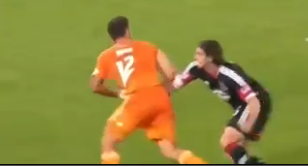 Still, Bruin seemed determined to get himself on the end of one of Davis' famous in-swinging kicks. With a burst of speed, The Dancing Bear made a second attempt at removing the pesky Croation from his presence.

In response, Jakovic spun himself around Bruin. With his right fist clutching the front of Bruin's jersey, and his left arm on Bruin's back, it looked impossible for Houston's forward to keep his feet. At this moment, only the most jaded of observers would fault Bruin for going to the ground. Moreover, many coaches and pundits might criticize him for not doing so, thus giving the referee a reason to disregard the ongoing assault.

In the meantime, Davis had accelerated towards the ball, sending an inch perfect kick towards the front post where it was met by Houston-legend Brian Ching. If not for a previous injury to Giles Barnes, the imposing Hawaiian forward may have found himself seated on the bench during this play. However, fate saw fit to place him on the receiving end of Davis' delivery. Summoning his years of experience, Ching stooped to redirect the ball into the path of the onrushing Bear.

Bruin changed direction, and left Jakovic veering past his left shoulder. As the ball took a bounce, the defender made one final attempt to stop what had suddenly become inevitable. He reached out, grasped Bruin's sleeve, and made a desperate lunge to reposition himself. But Bruin, having already weathered Jakovic's previous transgressions, leaned dramatically to his left as he lashed his right foot towards the ball. 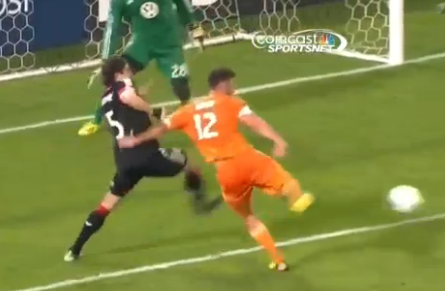 As if conceived by the Gods themselves, foot met ball in stride, sending the latter clean through the frozen goalkeeper's legs to nestle in the now thrice-ravaged net.

Turning to face his on-rushing teammates, Bruin declined the opportunity to celebrate. There was no Dancing of the Bear, dramatic slide to the corner flag or Stankying of legs. Instead, Bruin sent a steely gaze in the direction of Jakovic, making sure that he was aware of what had just occurred - despite three instances of penalty-worthy obstruction, the Eastern European had been bested. 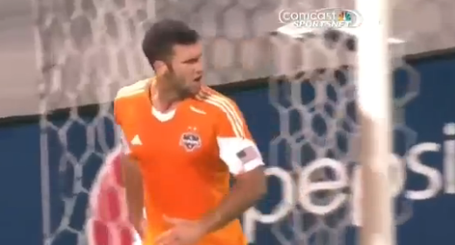 Houston would go on to win 4-0 over the hapless DC United, but it was Bruin's willingness to absorb certain assault, shunning the easier route of diving, and scoring an emphatic dagger of a goal, that stands out. In that instant, Bruin made Jakovic, the Capital City, and the entirety of MLS take notice - neither he, nor the Houston Dynamo, would shrink from the challenge of establishing themselves as the greatest in this land.

So next time Bruin enters your 18 yard box, MLS, do note that he wont be stopped so easily.

He is a Bear, after all.