MLS Fantasy 2013: It's all about defense and streaks

This week we examine winning streaks, undefeated streaks and the top five fantasy defenders. Oh, and we also let you gawk at the DT League leaderboard. Don't forget to sound off in the comments!

Share All sharing options for: MLS Fantasy 2013: It's all about defense and streaks

It's pretty cool to have the opportunity to do the write-up for the fantasy league each week, if not a little daunting as well. In my line of work, April 30th marks the beginning of the most torturous and busiest week of the year even if April 30th doesn't fall on a Monday. And so it was April 30th came and went, and I found myself neck-deep in piles of technology needing repair or replacement. Still, I feel I owe it to all of you to get this post out, so here it is even if it isn't quite perfect (and a week later than I intended).

I know you are thinking to yourself what the number 33 has to do with anything Dynamo related. Well, dear reader, I am glad you asked! This is the number of consecutive games the Houston Dynamo have remained undefeated when scoring the first goal.

The Dynamo aren't the only team extending streaks. This week DamagedGoods continued their steady ascent into stardom posting yet another win in the Dynamo Theory Fantasy League. This win pulls DamagedGoods to an impressive 9-0-0 record so far this season and a 117 total fantasy point lead over second place Flood Domination. Can they continue their dominance as they attempt to follow in the footsteps of Bundesliga team, Bayern Munich?

5. Jose Goncalves, New England Revolution - Goncalves biggest knock from a fantasy perspective is his inconsistency. Through 9 matches he has managed a respectable 59 fantasy points, but he has put a 2, 3 and two 5 point performances in those 9 matches as well. While there are certainly worse choices for your fantasy defense, I wouldn't hesitate to grab him as the Revs continue to show they are a force to be reckoned with.

4. Michel Garbini Pereira, FC Dallas - As much as we hate to see any FC Dallas players succeed in any form, we may as well get used to it. FC Dallas is on an absolute tear through the league right now, and so it comes as no surprise they boast 3 of the top 7 fantasy defenders through the midpoint of Round 11. Through 10 matches, Pereira has 61 points with no single match below 3 points. A big knock is he has only put up a double digit performance in one match.

3. Jamison Olave, New York Red Bulls - Everybody knew the Red Bulls would not continue their terrible form, at least not without bringing Rafa Marquez back. New York have won their last 4 matches, and Olave has appeared in all but one of the Red Bulls' matches. While his average points per game is less than most on this list, he is still a worthy pickup at 62 fantasy points with a couple of 1 point performances but also a massive 14 point performance against everybody's favorite whipping boys in DC.

2. Matt Hedges, FC Dallas - Hedges is a hard worker and of the few FC Dallas players I don't outright hate. He's notched 67 points through 10 matches. What he shows in hard work pays off in fantasy points as he has seven matches above 7 points (which is really good for defenders).

1. Aurelien Collin, Sporting Kansas City - Ahh yes, the defender we all love to hate from the team we all love to hate. I have no idea how he is as good fantasy-wise as he is, but he is stellar. A staggering 79 points through 11 matches puts him as the best fantasy defender through the midpoint of Round 11, and there isn't a question about it. He boasts 3 matches in double figures, and a solid 6 matches with more than 7 points. Look, I do hate the guy for how he plays, but clearly he is not one to pass up in fantasy leagues.

That brings me to our league, the Dynamo Theory Fantasy League (Liga Treora de Dynamo). 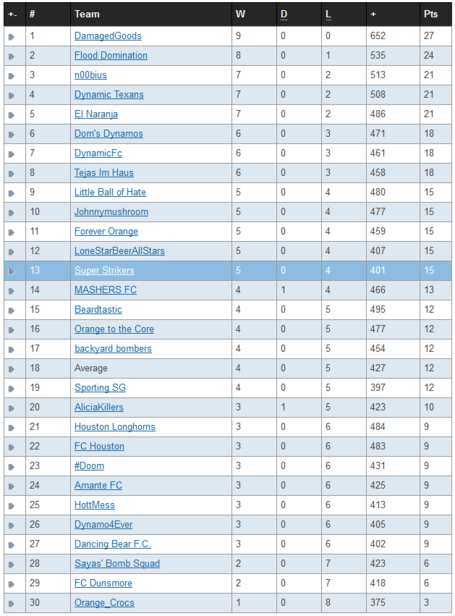