With obvious shortcomings in the "away form" department, the Houston Dynamo flew to Los Angeles with expectations relatively low. However, with an organized defensive effort, stout goalkeeping, and a UK connection, Houston stole 3 points from the reigning MLS Cup Champions.

This early in the season, non-conference wins are nice, but they are not something to get too worked up ab--

BAHAHAHA suck it LA! How does that "L" feel?

Ahem. Sorry. I got a little carried away there.

As I was saying, winning at LA is an impressive feat, but will inevitably be moot if we don't take care of business in a difficult two match stretch against DCU and SKC this week. Nevertheless, its nice to take a moment and soak it all in. So sit back, hit the Marvin Gaye, and let the smooth caress of Dynamo victory wash over you.

The media loves a good story that will scare the living sh*t out of Mr. and Mrs. Viewer. In doing so, its always easy to latch onto some threat, like climate change, drugs-your-kids-are-doing, disease, etc., and add some scary adjectives to them. So we see apocalyptic global warming, zombie people, and - my favorite - Super Bugs.

Or, more realistically, drug-resistant bugs. Essentially, when antibiotics are used incorrectly, and frivolously, infectious bacteria slip through the cracks. This is especially apparent when Broad Spectrum Antibiotics are used. You see, it takes at least 24 hours to culture and definitively identify an infectious bacteria. In that time a doctor needs to be doing something to treat their sick patient. So, based on the age, activity, and symptoms of a patient, the doc will do his/her best to treat what they believe to be the infecting bacteria. This is fine for doctors that are, well, good, but when doctors simply prescribe antibiotics because the patient asks for them, or because they aren't sure what's going on, that's when a bug can slip on through and get stronger - basically creating a bacteria boot camp in your body.

Back to The Soccer

LA had plenty of opportunities to equal, or surpass, Houston's goal on Sunday night. 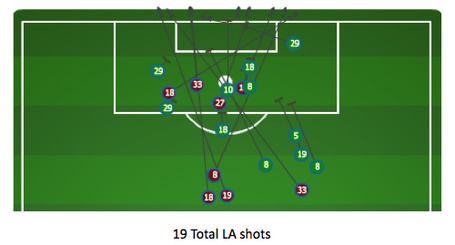 However, the men in orange did not relent, and held firm for the clean sheet. This was due, in part, to a willingness to get in front of the ball, force LA off balance, and ensure that their only attempts were half-hearted at best. 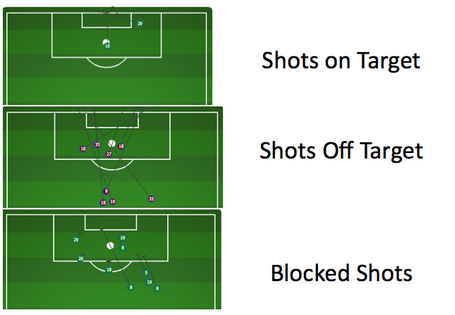 In total, this resolute defending led to two shots on target - one by Zardes that went straight to Hall, and PK from Donovan that was terrible. Along with that, there were eight shots off target: four from distance and four within the box. Finally, there were nine shots blocked by the Houston D. Nine. How does that compare to previous Dynamo matches this season?

Yes, that is definitely a product of LA creating tons of chances because they are, well, LA, but that doesn't take away from the importance of that single statistic. If not for nine blocked shots, would we have left LA with 3 points? Maybe, but how many times does a team give up 18 shots and not concede? I would suggest never, but I haven't checked.

A follow-up to this question is why LA was unable to take advantage of 18 (sort of) attempts towards goal. In short, disregarding the laughable PK, there were nine shots taken from inside the box - or high percentage opportunities (in theory). In these opportunities, four were blocked, one was saved easily by Hall, and the rest failed to find the frame. Whatever LA tried, the Dynamo found a way to force them off kilter.

In response, the Galaxy...um... well they didn't actually have a coherent response. Which is why Houston emerged form LA, much like a drug-resistant bacterium, stronger than they came in. The half-hearted attempts at neutralizing the Dynamo in LA left plenty of time for Houston to adapt, respond, and - eventually - win.

Driver has scored two goals for your Houston Dynamo. An equalizer against Frisco and the winner against LA. That's a Cameron-esque intro to the Orange scoresheet. Exciting.

Speaking of Driver, goals, and awesomeness - did anyone else hear Whitney Houston's "I'm every woman" when he scored? No? That doesn't make any sense, does it? Well I did, but maybe that's because I watched this Funny or Die video, and now whenever I hear Whitney I think of dragons.