Is it just me or do we just suck?

Taking a look at a few key statistics and how they compare with last year is a great way to remind us all hope is not lost, it is just playing a terribly un-fun game of hide and seek.

Share All sharing options for: Is it just me or do we just suck?

But we weren't.  Despite the glaring shortcomings we all acknowledged earlier in the season, the team had a healthy winning streak.  Goals were being scored at will, and even though we were conceding at an uncomfortable frequency we were pulling out victory after victory.  The team was riding a wave of effort, discipline and focus.

With eight matches left to play, the majority of which remain against Eastern Conference opponents in the playoff picture (and a good portion of those home matches), the outlook isn't completely doom and gloom.  Still, when you take a good, long look at how the last few matches have played out, you begin to wonder if this team is anything resembling the Houston Dynamo from last season.

The Dynamo key players, Will Bruin and Brad Davis have struggled mightily.  Some have mentioned Davis' service may not be as accurate or as pacey as it once was, but I don't think that tells the whole story.  Taking a look at his current stats for the season is considerably more telling.

Through Davis' 19 games this season, he has 6 assists and 4 goals.  These numbers represent exactly half of what he had all of last season, but with 12 less games played.  He has started all but one of the games he has played.

Some have mentioned Bruin's struggles to find the net of late as reason enough to bench him.  Through 22 games started this season (9 less than last season), he has 6 goals which is half his output from last season when paired with Calen Carr for the majority.  That doesn't tell the whole story, either though, as he also has 6 assists which is already 2 more than the entirety of last season.

Perhaps, however, that last stat comparison from last year to this year says it all.  We all have seen it, but it is nice to see it confirmed in the stat line.  Will Bruin is having to create chances, as opposed to having them created for him.  He is a poacher, who given time to find space and dissect opposing defenses can do so with significant ease.  But he cannot create those chances for himself and subsequently capitalize on them.  When he is the one creating, he is the one missing.

Now, I bring you the most eye opening stat of all, Calen Carr.  In 2012, would you believe Carr only netted 4 goals and a whopping 2 assists?  Granted, he only started 17 matches, but this just goes to show how much we forget the shortcomings of Calen Carr prior to the playoffs.  In comparison to his regular season output, Carr shined in the playoffs, and being that the last time we saw him was the corner flag leap, that's the only thing we remember.  For comparison's sake, Carr had 1 goal and 2 assists in the 4 playoff games last season.

Giles Barnes, on the other hand, has 6 goals and 3 assists so far this season, which outclasses any forward not named Will Bruin last season.  So what gives?  How can it be the forwards are actually performing better statistically than last season?

To be honest, it comes down to set pieces.  While I couldn't drum up the statistics on the total number of set piece goals last season I was able to locate the stat for the Dynamo this season.  It is scary.  Of our 29 goals so far this season, a grand total of 5 have come from set pieces.  Guess where that ranks in all of MLS?  Bottom 7.  Ouch.  That hurts.

Right now we sit tied for bottom 5 in shots conceded per game, and dead last in interceptions per game.  We rank top 7 in shots per game, but bottom 9 in shots on target per game.  Is the picture becoming clearer yet?

One more statistic to feast upon, dear readers.  The Houston Dynamo currently sit second to last place in successful dribbles per game.  Each of us have said it before, and we will assuredly say it again, do not let the ball rest at our feet because we simply cannot do anything with it there.

I will simply leave you with the following graphic, which highlights what I feel is our biggest struggle to date, and feel free to comment as I think this stat league wide is the biggest eye-opener of all. 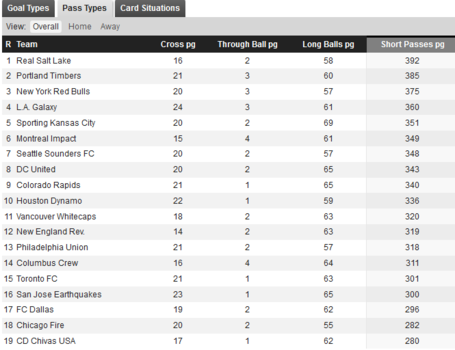