American Outlaws is the rapidly growing supporter group for the U.S. Men's National Team and Houston is one of the lucky cities to have it's own chapter.

I recently got the chance to talk with Megan Flora, the president of Houston's American Outlaws chapter. A familiar face, she can usually be found decked out in her finest orangery at BBVA on Dynamo games days - but orange isn't the only color she bleeds. Since taking over as president, she and the other leaders of Houston's Red White and Blue squad have worked hard to grow the chapter and, of course, the love of the USMNT.

What is the history of AO Houston? When did the chapter start and when did you become president?

AO Houston is the fifth chapter out of 90 right now, and by October we will hit 100 chapters! I became the chapter president in December 2012. My first game as president was the game in Houston, USA v Canada. There was a lot of prep in dealing with US Soccer and trying to reserve the BBVA Compass Stadium supporters section. The supporters section in BBVA is the perfect area because it's bleachers instead of seats! The night before party was the biggest challenge in making sure everything went smoothly. We had a massive turnout with members who traveled from all over, which also involved Taylor Twellman and Alexi Lalas.

Why should people get involved with AO Houston?

If you're a soccer fan in the Houston area, we really encourage people to become part of AO Houston. It's more then just getting together to watch a couple of games, you meet people who could potentially be life-long friends and travel buddies. AO Houston makes sure everyone is part of the family by always extending a hand out and making sure you feel welcomed. For our members only, we have a private facebook group where members can interact with other members, discuss travel arrangments and get first sight on our merchandise. Our chapter is also very family-friendly and we encourage all ages to join!

What makes watching games at Lucky's with AO Houston better than watching the games at home with say one or two friends?

The great thing about watching the games with AO is the passion we bring in the bar with chants during the game, and the crazy passion we show when we score a goal. Nothing is more awesome then jumping up and down in a bar with 30+ people hugging and high-fiving. If you want to buy merchandise at our viewing parties, we always have a table set up in the front with everything laid out. Our official bar is Lucky's Pub downtown. We even have our own shots called AO-BOMBS which are $3 and they are red white and blue. Never heard or seen one before? Come in and try one for yourself!

Some people consider the AO environment to be a 'bro' type culture or college like atmosphere. What would you say to people who have those types of pre-conceived notions about the group?

Some people will always find negative to say about the "supporters culture" or I've seen things like it being called a "frat party" my response to people who have never been out to a game or traveled is to give it a try before you judge. American Outlaws is so diverse with many men, women, and kids. Everyone is family here and will take care of one another at any given time! Many will open up their doors and give another member a place to stay while traveling for games. It's pretty cool knowing no matter what city I travel to, I have someone I can call up to see if they want to grab a bite to eat and talk soccer.

How can people join AOH?

People can sign up easily for a one year membership at http://www.theamericanoutlaws.com/membership and then select AO Houston as their desired chapter. We also sign people up at Lucky's with our pay pal card reader which is the same way we sell our merchandise (we take cash & credit).

Do you guys have merchandise?

We have chapter shirts, Koozies, shot glasses, and we just got scarves! AO Houston goes beyond just meeting up for games, we're family here so we occasionally will let others know were going out to a bar for happy hour or someones birthday and we meet up. Like I said, it's the best way to meet friends! Soon, when the weather isn't so hot I think it would be a great time to start pick-up games. 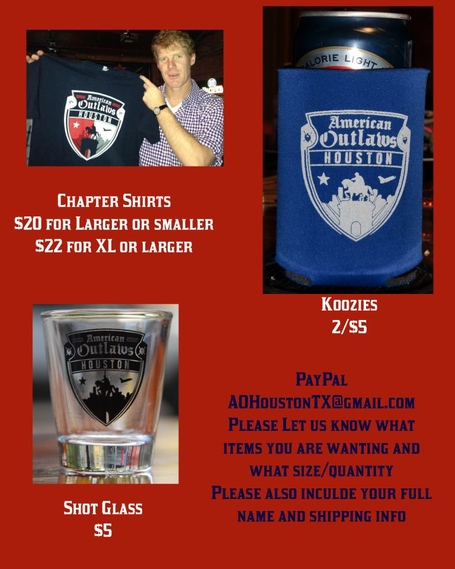