With all the roses being handed out on The Bachelor, who made the cut as Houston Dynamo's most eligible men? Read on to find out.

Share All sharing options for: The Bachelor: Houston Dynamo Edition

Editors Note: Michael Chabala is not currently under contract with the Houston Dynamo, but there is a possibility he could re-sign with the team before the season begins.

It seems everyone is buzzing about the new season of The Bachelor, starring soccer player Juan Pablo Galavis. Who did Juan Pablo give a rose to this week? What drama unfolded to get his attention? With all the excitement going around, a couple members of Dynamo Theory came together to discuss the Houston Dynamo’s unwedded members. The panel has selected the following men we have an "orange crush" on. 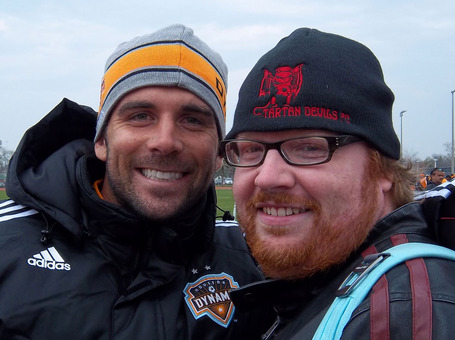 Mike Chabala (that is him on the left), known as "Chewie" to the intrepid, has warmed the hearts of the Houston fan base for many years. Born in Fresno, California, Chabala is a man well acquainted with life on the coast. Perhaps you caught his photo shoot with the Houston Chronicle? Chabala candidly posed beside fellow Dynamo Tally Hall and Kofi Sarkodie. If you feel like you don’t get enough support, stop by Chabala’s Twitter feed; he is known for his inspirational messages and positive attitude. 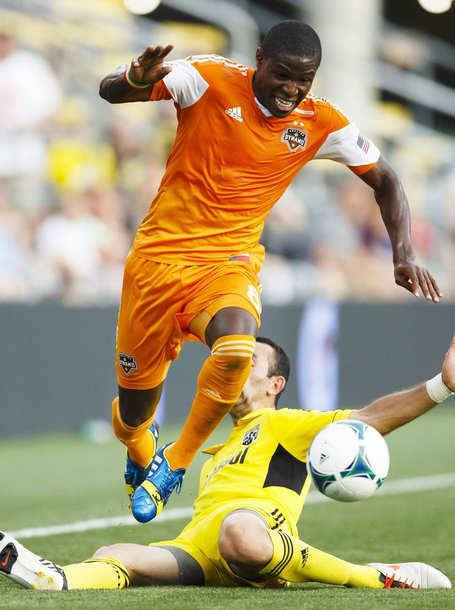 Holding on for a hero? If you like the idea of someone riding to your defense, look no farther than Kofi Sarkodie (That's him hurdling the opposition above). This Dynamo defender netted an award this year for a show-stopping double goal line save when it looked like all was lost! And did we mention he was smart? Kofi is a certified valedictorian! 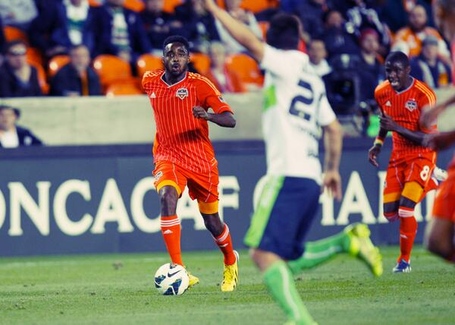 If "cool" is what you’re after, Warren Creavalle is your man (that's him running with the ball above). Not only did Creavalle step into the midfield void this year to bolster our defense, but he did it with style, earning himself Young Player of the Year. Creavalle was unavailable for Dynamo Theory questioning, however, due to being detained in a bathroom.

There you have it, Houston Dynamo fans. Which player would you want a rose from? Leave a comment and share with us!