Friend or FO: The Gap Between Fans and Front Office

A rough week of PR highlights a gulf between those that run the league and the fans that MLS targets.

Share All sharing options for: Friend or FO: The Gap Between Fans and Front Office

"I’m demanding that he refrain from making comments that are critical of our players and damaging to our league."

Just last week, MLS Commissioner Don Garber delivered this quote as part of a surprising press conference that addressed remarks by USMNT Coach Jurgen Klinsmann earlier that morning. Garber, typically characterized as calm and level-headed, lashed out at Klinsmann's "detrimental" criticisms of American players returning home to play in MLS after European stints (most notably Michael Bradley and Clint Dempsey). The insinuation from Klinsmann is that MLS-based players will have to prove their ability has not waivered from playing in the States.

This prompted a "disappointed and personally infuriated" Garber to host an impromptu teleconference and discuss the importance of Jurgen stepping away from an outright criticism of the MLS and USSF "vision":

Had Garber been aware of what was to happen to Colorado Rapids beat reporter Chris Bianchi just thirty minutes later, he may have chosen less coarse words. That would be because Bianchi, after a week-long hiatus, was fired from his post as team reporter on MLSsoccer.com, the league's homepage and news portal. Bianchi asserts that the disciplinary action was "due to difference in opinion" regarding his team coverage. To back up this assertion, Deadspin and Bianchi published e-mails sent by Colorado Rapids president Tim Hinchey that show a clear contention with the way Bianchi, in response to a directed tweet, criticized the Rapids' Front Office for their disappointing year:

"Explain to me your point Chris or don't ever reach out to me again. Period."

Despite Bianchi's attempt at explaining and defense of his use of social media, Hinchey went on to end their exchange, "I've given you direst [sic] access on and off the record consistently. No excuse. We are done here. You too are young and I hope you learn from this mistake."

MLSsoccer senior editor Nick Firchau contacted Bianchi later that day and explained that, following a Rapids phone call to the league office, Bianchi would be put on a hiatus and refrain from publishing articles on MLS' website (including covering the upcoming match against Chivas USA). When that period of time elapsed, he was eventually called again by Firchau and let go.

To his credit, Hinchey insists that the Rapids had no involvement in the decision but, without a comment from the league or any MLSsoccer staff, it's difficult to know what factors were brought into consideration. That the firing happened just minutes after Garber's remarks sends a chill down many spines and flickers scenes of conspiracy. A commissioner delivering an address that includes a call for alignment from "everyone who is paid to work" in soccer and then letting go a league writer who offered a critique of a poorly performing team is damning.

Further, Bianchi discussed the regulations that MLS writers must operate under including shying away from the mention of salary and attendance figures and never calling for firings, trades, or players to be cut (no mention of Front Office critique). It isn't surprising that MLS have these restrictions and, in that sense, it is the job of the league website to promote and control its content in order to serve a specific purpose. MLSsoccer.com is a marketing tool for a league and sport that has had to endure very much to work toward the same "vision" that Garber references.

That shouldn't mean it carries cheap content, either. MLSsoccer.com contains a stable of talent that provides possibly the most information to the MLS fan. Editor-in-Chief Greg Lalas' weekly Anatomy of a Goal series and the hard-to-love Simon Borg's Instant Replay do very well in breaking down tactics for a fan that likely can't get this kind of analysis from other national outlets, much less local ones. Dynamo fans are fortunate to have the talented Darrell Lovell providing news content and discussion on Houston's finer points without needing to toe the line of MLS' journalistic restrictions.

While American soccer fans are lucky to live in the age of Twitter journalism and stay connected to great independent national writers like Grant Wahl, Brian Straus, and Steven Goff, coverage that is concentrated to their home club can be more difficult to come by. Ives Galarcep rarely mentions the Dynamo until it comes playoff time. Now imagine being a Chivas fan.

The Colorado situation highlights a real problem in the MLS fan community. For some teams, particularly the struggling ones, fans find it difficult to uncover in-depth analysis and news content at all. In those cases, the beat writers for MLSsoccer provide one of the lone sources of coverage. When that team struggles, fans are bereft of the opportunity to really assess issues with the team if an MLS-sponsored writer is their only channel. 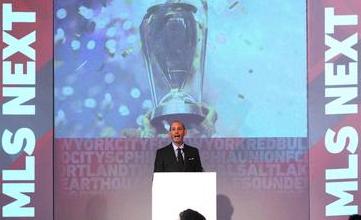 MLS' website is a terrific source of information but it should certainly be taken with the idea that the league uses it to control certain narratives which isn't to say that writers are instructed when producing content. This is an extension of the single-entity thought process and it could be argued that the league may not be at a point to relinquish total control over these narratives. MLS still has work to do in order to be a legitimate sport contender in the global and American markets. Garber's work in the league should rightly be lauded and the unified "vision" that he touts consistently progresses into new iterations - MLS 1.0, 2.0, and, with new branding, 3.0.

But as the league grows, so too does the fanbase. MLS continues to target and foster the "diehard" and "avid" fans after the successes in Seattle, Portland, and other recent expansions. In nearly all marketing material, supporter groups' images are ubiquitous and even the NFL and NBA have stopped by to learn from the successful fan engagements with the clubs.

As this demographic swells, the opaqueness that MLS operates behind will inevitably begin to chip away. Fans now more than ever before have called out for consistency and clarity in rules and league operations. "Accountability" is being targeted to the MLS brass in a way that only the "Big 3" US league officials have known before. From a marketing standpoint, MLS 3.0 is well on its way but with it comes a new generation of fans struggling to be treated as adults.

"whoever is running this feed stfu"

Paulson has since deleted his tweet and apologized. In contrast, Houston's president Chris Canetti does well to address fan questions, no matter how critical, within the same medium (and does so without resorting to childishness).

Being able to foster a conversation about the team, its players, or its management outside the specter of MLSsoccer is vital to the growth of a new generation of fans. Independent sources like Dynamo Theory, Orange in the Oven, and Soccer Matters try to help satisfy the Houston market and its thirst for dissection of sport. Fans should continue to support these local and national outlets if they would like to rely less on the filtered direct content of Major League Soccer. Club presidents may threaten to revoke access, ownership may attempt to silence legitimate criticisms, league brass may ignore real issues but fans should still pursue the coverage they want.

As Major League Soccer enters into their new generation, they will need to recognize that truly for the first time, there is a balance to be kept between guiding growth on their own and allowing fans to shape it in their own image -- even if that runs counter to their business model. That will mean relenting control (and increasing transparency) but it will also mean that fans will assume tougher responsibilities in helping the league grow.

No longer can fans be passive but should instead be active contributors to its maturation. Participation goes beyond simply going to games. It means watching non-Dynamo games on television, it means registering clicks on local and national news websites, and it means maintaining conversations with each other and the journalists that provide us the content. Being a participant to growth means developing knowledge of the game, the team, and the league and demanding pertaining information when obscured.

MLS fans don't make claims that our league is the best in the world. There is an understanding that it is a league on the rise with glaring flaws that will eventually be addressed. Fans don't have an issue discussing these flaws and how to improve. Until now, people like Tim Hinchey, Merritt Paulson, and Don Garber (among many others) seem to put the fan's voice aside and press on with the business plan as stated. Moving forward, however, it is time fans are given a say in the league they want to follow. Doing that starts with the people in suits being able to take a little criticism.