I've been appointed to the position of "Fantasy MLS Guru" by Dynamo Theory, and I'm looking forward to using a combination of statistics, divination, and sheer luck to repeat my 2013 FMLS performance. To try and back that up, I've created the "Final Fantasy: Dynamo Theory" private league (code 1209-571, or just click the link to auto-enroll), so come join in and see if you can use my own advice against me to keep me off of the top spot! Tell all your friends, because if the league gets enough players, MLS will kick in a cash prize!

Speaking of advice, the new Fantasy MLS rosters are now available for selection, and MLSSoccer made some drastic changes in FMLS 2014, including:

So, with all that in mind, let's get down to separating out the Fantasy MLS wheat from the chaff. Last time, I discussed overvaluing forwards early, and with that in mind, we'll be applying my second FMLS mistake from last year when we select our rosters:

The rosters are out... and they're overwhelming. There are 461 players to choose from, and the starting budget is $120 million to create an 18-player roster. Attempting to decide which players will score the most fantasy points in the entire 2014 season is like trying to beat Simon Borg in a shouting match -- you're highly unlikely to succeed, and even if you do, you'll still have a headache trying. Focusing on the first five rounds allows us to whittle down the field to a more manageable number, and here are the key considerations that I used in the process:

Defensive points are going to be key in the opening rounds, and these teams have match-ups that look suited for a shutout in the opening three to five weeks: 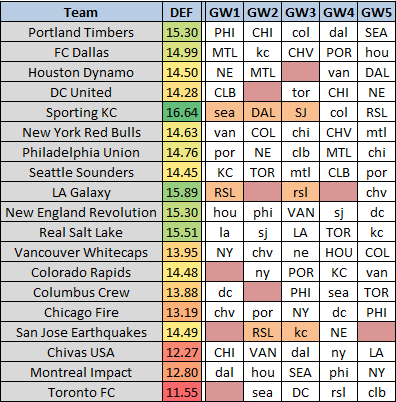 "DEF" is the sum of the team's 2013 points-per-match for the goalkeeper and the two top defenders, where available. In all of my points-per-match calculations, I only include matches where the player had at least 60 minutes played. Portland, FC Dallas, Houston, and DC United each have three of their first five matches at home. Portland and FC Dallas have no byes in the opening rounds, and Houston is always tough to break down at home. With all of the moves DC United has made, I'll likely take a gamble and include at least one of their back line. Parke, Franklin, and Boswell are all solid defenders, and with that kind of support, Hamid may be able to show the incredible shot-stopping he's capable of. Sporting KC have two of their first three matches at Sporting Park, but the CCL weeks (highlighted in orange) make them a bit of a gamble. Seattle are facing three of their first four opponents at home, but I don't expect them to shut out Sporting KC, so they're definitely on my radar for week two.

Have enough starters to last at least three weeks

All of the red squares on the graphic above show the bye weeks -- FMLS rounds where there is no match -- for each team. Players on those teams will not earn any points during that week, so plan accordingly. Portland, Dallas, New York, Philly, and Seattle are all examples of teams that do not have a bye for the opening five rounds. Also, take into consideration whether or not a player is definitely a starter for the club. The cheaper players may not make the starting XI each week, and with no automatic substitutions, regular starters are at a premium.

Ballin' on a budget

$120 million is a lot less fantasy money than it sounds like. The FMLS budget averages to $6.67M per player, and with top-tier fantasy targets such as Magee, Higuain, Collin, and Zusi clocking in at $10-11M apiece, tough decisions will be made to ensure that rosters score maximum points without sacrificing bench depth. Here are my suggestions for how much I recommend spending on each position.

Using the minimum in any position means having at least one "throw-away" player -- a player who is the minimum possible cost for that position but will likely never see the field. It's possible to get away with having two throw-away forwards, but that's only due to the focus on defense and midfield to start the season.

Based on those three primary objectives, here are some options to consider for each position. This is by no means a complete list, but it can be used as a springboard to start gathering ideas for a full 18-player roster. I've aggregated some of the data for each player (based on 60+ minute matches) to make it somewhat easier to digest:

*ATT is the sum of points earned/lost from goals, assists, crosses, key passes, big chances created, and penalties missed. BCF values have been removed, and +2 has been added for each assist to account for potential second-assists in 2014.

ATT and DEF are also adjusted for positional changes, such as Rodney Wallace moving from DEF to MID (and thereby reducing his clean sheet bonus from +4 to +1 for each shutout earned).

Even though Rimando currently has the most ownership (19.9%), Hall and Ricketts are the top two 6.0 options based on the starting schedules. All three have no byes in the first round, and picking them means feeling safe having a throw-away $3.0 second keeper.

The other route is to go with a $5.0 and a $4.5 keeper. This is a little riskier, but has the potential to bolster the total salary if one or both of the budget keepers starts out in form. Surprisingly enough, Kennedy is the second-favorite GK right now (18.7%), and looks to be the best value pick based on 2013 stats. Kronburg and Lampson are both worth a look, as both would be well worth their value if they can retain their starting spots.

Defenders saw the biggest overhaul in MLS Fantasy for 2014, as salaries have been adjusted to match their fantasy worth. Even though Collin is now priced at $10.0, he is still near the top in terms of value at 0.67 PPM/$. Those seeking more budget-friendly options have some serious choices to make. Based on my earlier analysis, the players above Collin are worth considering. Players like Collin, Michel, and Baptiste are on my radar for now, but a lot can change over the next month. With the breaking news of Julio Cesar coming over on loan, TFC could have a sleeper pick in there for round two. 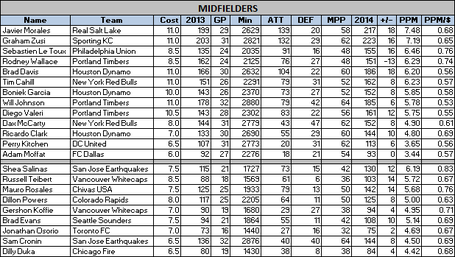 Midfield is where the bulk of fantasy MLS dollars will be spent. As much as I will miss having Donovan in my FMLS team to start, LA's CCL matchups paired with their two bye weeks make buying anyone on their roster a difficult proposition at best. If Le Toux makes his way back into a consistent spot in the starting lineup, he could be a valuable mid-range option. Even adjusting Rodney Wallace's numbers to remove the clean sheet bonuses, he is still a fantasy force to be reckoned with, assuming he's fit to start by next month.

The decision to be made is between two top-end forwards: Higuain or Magee... or both? Picking both will force budget accommodations across the rest of the lineup. One of the only things I'm certain of in my entire roster selection is that I will definitely have at least one throw-away forward worth $4.0.

If all of this seems overwhelming... don't panic! There are still a few weeks left before the rosters lock, and a wildcard is available to reboot a failed team if things go sideways. Right now is a great time to go ahead and start making a lineup, while there are no consequences! Rosters can be modified an unlimited number of times up until the opening match day, and I've found that it helps to get a visual idea of some different squads that are available within the budget. Take some time, study the options, and good luck!