One of the biggest keys in Fantasy MLS is learning how to build a strong fantasy bank account in order to field the strongest team possible. Having money means being able to afford star players. I've explained why to be careful about overvaluing forwards and how to go about planning the initial 18-man roster. This week, we're going to take a look at the basics behind the Fantasy MLS price structures, and some of the hot movers from last year that did the most to pad FMLS managers' pockets.

How to Be a Self-Made Fantasy Camilonaire

My third mistake in Fantasy MLS 2013 was that I didn't catch on to how the FMLS transfer market worked until about a third of the way into the season. By that point, my modest budget couldn't quite compare to the managers in the top 10. They could afford one more Landon Donovan, Robbie Keane, or Graham Zusi than I could down the stretch. Needless to say, being able to start the top XI fantasy players without having to worry about budget turns out to be a nice advantage. Here are some steps to maximize the fantasy coffers:

The two most valuable assets at our disposal for ensuring that we make the right moves are:

1. The Transfers In and Transfers Out stats, especially for the round: 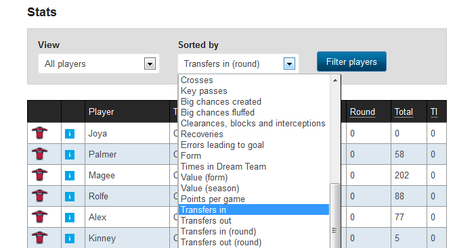 If a player is receiving a large number of transfers in and few transfers out, he will likely increase value overnight. Conversely, if a majority of managers are dropping a particular player, he'll go down in value.

Knowing the difference between these three numbers is crucial to maintaining an FMLS budget.

Remember that managers only get to keep 1/2 of the difference (rounded down) between the purchase price and the current price. Looking at this page will confirm how much you will profit -- if at all -- from selling a player. You will only profit from selling a player that is currently worth at least $0.2 more than what you bought him for.

Here's a hypothetical example of how this knowledge can be used to preserve as much FMLS budget as possible:

Example: Let's say that round one is over, and I'm still sitting on $120.0 million in my roster and $0.0 in my bank. For whatever bizarre reason, I decide that I want to transfer out Tally Hall before round two. When I look at the Transfers In and Transfers Out stats, I notice that 300 managers have already transferred Tally out of their squad today, and only a handful have transferred him in. I also notice that Donovan Ricketts has a large number of transfers in and a favorable schedule for the upcoming weeks. Morning arrives, and Hall's value has decreased to $5.9. Ricketts increased to $6.1.

It's Not ALWAYS About the Benjamins

Don't make a trade just because one player is decreasing in value and another is increasing in value. Make sure that the trade makes sense in your roster before making the move. Also, managers have to tread a fine line between making transfers early or late in the round. Picking up a highly-sought-after player early in a round can mean the difference between gaining $0.1 and the full $0.3 to the team value, but managers that wait until just before the next round starts will have more knowledge about injuries and starting lineups.

Top four profitable players in each position in 2013 (Price v. Round)

Based on this data, it was equally possible to profit from any of these positions, although surprisingly, defenders were slightly less profitable than midfielders and forwards. Defenders from strong defensive units like Sporting KC and LA started with relatively high prices, so even fantasy #1 Aurelien Collin only netted a price increase of 1.1 from his lowest to highest point of the year. Chris Klute and Jose Goncalves saw their stock rise as their respective teams posted good defensive results, and Michel Garbini Pereira 's form -- much like the rest of FC Dallas -- shot out of the gate, only to nose-dive halfway through the season.

In terms of midfielders, Will Johnson's playmaking ability in Portland scored a lot of points early on, but towards the end of the season, the goals and assists were spread out around a lot of different talented players, reducing his value somewhat. Amobi Okugo's increase was due to his bargain price, and for most of the season, his consistent defensive bonus points made him a safe play. Mike Magee and Javier Morales both had consistently excellent seasons, both creating and scoring goals almost at will.

The defenders and midfielders' prices were less prone to large price swings, with the top midfielders having the most steady trends of the group. This makes sense, due to the feast-or-famine nature of most forwards' points accumulation. Camilo Sanvezzo, Marco Di Vaio, and Jack McInerney all started at around $8.0-8.5, and swung wildly depending on their form in the previous week (or in McInerney's case, 20 weeks). Diego Fagundez was the bargain forward of the year, dipping down to 5.6 before steadily rising all the way up to 7.1.

Aside from Mike "Round 1 Hat Trick" Magee, prices for these profitable players didn't make their jump until three or four weeks into the season. Part of that was likely due to international call-ups occurring early on in the 2013 season, so it will be interesting to see if that trend continues in 2014. One other thing to note is that none of these high-value players doubled in value overnight. The advantage of the $0.1 per-day and $0.3 per-week salary adjustment cap is that managers are able to jump on the bandwagon when they realize that a player's stock's going to continue rising.

Now, let's examine the top 80 transfers for an individual round in terms of transfers in vs. transfers out, and try to come up with the answers to a few transfer-related questions.

Which rounds saw the biggest transfers in? 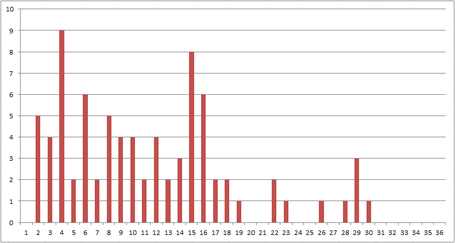 Not surprisingly, a majority of the major transfers happened early on in the season. Managers are faced with reality not matching expectations for some players, and thus have to modify their lineups accordingly. Some of this could also be attributed to the fact that more managers are actively participating in FMLS earlier on in the season.

Are the top "transfers in" reactionary -- are they due to a great previous week by the player?

A majority of the biggest transfers in -- 45 out of the top 80 -- took place after a player had an excellent previous week. This isn't terribly surprising, but definitely worth considering. If a player has a great week, managers are going to want to include the player in their squad in hopes that the player continues to score big. So, if you want to bring in a player that's going to gain money, target players after they have a big game.

Did the transfer pay off, Fantasy MLS points-wise or budget-wise?

Looking at the graph on the right first, it's not shocking to see that after a round consisting of a large number of transfers in, the price of the player continues to do well during the following two weeks. More than 3/4 of the time, the player's value will be at least what it started at before the transfers. So, picking up a player that has a high number of transfers in (700+ net transfers in for the week) will most likely prove financially beneficial, even two weeks later. What's more interesting, though, is the apparent lack of correlation between a highly-sought after player and the number of points that he scores shortly thereafter. More than half of the time, the player that was brought in will average less than five points per round in his next two rounds. Just because all of the managers want a player doesn't necessarily mean he'll score big points for your team!

Try to find the balance between short-term and long-term gains, both in fantasy dollars and in fantasy points. The end goal is to score the most points, but not being able to afford the best players will mean not being able to take advantage of the points they are scoring. Good luck and happy hunting!

Don't forget to join the Dynamo Theory Fantasy MLS League (code is 1209-571)! All are welcome!