Last time, we looked at the ins and outs of the Fantasy MLS transfer market. Now, I'll focus on a different kind of player movement that makes a huge impact: differences in home and away form. This should definitely be accounted for when making picks. If a player has several away games coming up, they will likely score less, and as a side effect, also be less desirable to other owners.

It stands to reason that players will generally earn more fantasy points in front of their home crowd. Home field advantage affects the teams' results, which translates to more clean sheets and more goals. But the question is... by how much? Using games where players participated in at least 60 minutes, and calculating out the average points per 90 minutes on a team-by-team basis yields the following: 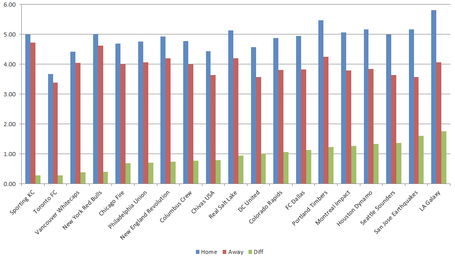 The teams are sorted from left to right, where the lowest difference between home and away PP90 is on the left. Sporting KC, DC United, Vancouver Whitecaps, and New York Red Bulls put up nearly the same numbers regardless of location. Teams like LA Galaxy, San Jose Earthquakes, Seattle Sounders, and Houston Dynamo heavily relied on home cooking to produce results. These were teams that were difficult to break down at home, but didn't always get the job done on the road. It may be worth considering dropping players from these teams for away games.

So, certain teams performed better at home, but what about specific positions? Here are the breakdowns of points per 90 minutes for all four positions:

Points Per 90 by Position - Home v. Away

Defenders seems to suffer the most from playing away, taking an over 1.1 point dip in PP90 when they travel, and forwards aren't far behind. Goalkeepers, on the other hand, are the least affected. This accounts for all players with a total score of at least 50 points. Examining each of the top-producing players (by PP90) produces this chart:

A few players, including Ike Opara, Graham Zusi, A.J. Soares, and Tim Cahill, actually averaged more points on the road than they did in front of their home fans. The right-end of the spectrum agrees with the study by position: three of the four with the highest home-to-away differential were Fantasy MLS defenders: Rodney Wallace, Futty Danso, and Omar Gonzalez. Javier Morales definitely benefited from the RioT, averaging almost 3.5 points MORE per 90 minutes on home soil.

So, are you going to change your roster at all based on this data? Who do you think can produce some serious away points in FMLS in the first few weeks? Let us know, and feel free to ask any questions that you may have about the data in the comments below.