Taking a look at the Houston Dynamo Week 1 performance against New England, and what will need to be fixed in order to beat the always pesky Montreal Impact in Week 2.

Share All sharing options for: The Differential: Forward Thinking

Saturday was pretty fun, you guys. Will Bruin put the league's defenses on notice, OBG exuded his usual brilliance, Omar Cummings' head was apparently crafted by Hephaestus, and fireworks are super neat.

If you want to bask in the glory from Saturday some more, I suggest you check out our match recap and player ratings, as well as our post on "Big Dave".

Basking, however, is not what we're here to do today. No, as I discussed in the intro to this new series, we're here to scheme and scrutinize throughout the season. As always, include your comments below as to what you think are the biggest problems facing the Dynamo - new or recurrent - as well as any praise or admonitions towards this here writer.

So, for anyone following me on Twitter, or for anyone who happened to catch the game Saturday, one thing became apparent - David Horst is very tall, and was pretty darn impressive in his first outing next to Jermaine Taylor.

That's it, friends. Last week I worried audibly about the state of our defense, but the case is closed. Shut it down, turn off the lights, we've got it covered. 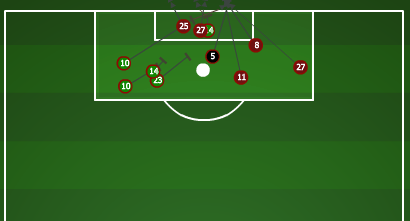 So, despite Horst's brilliance, and the obvious chemistry between him and our Jamaican mainstay, there is still work to do. New England found far too much room inside the box at times. And, while Tally never had to exert a 2013-level of effort, there were still some nervy moments. If not for a post, a crossbar, and Bengtson's impossible miss, this game could've been a lot more stressful.

To put it simply, we were just too sloppy at times across the back four.

What's encouraging is that, when tackles needed to be made in the box, they were made. OBG, Horst, and Sarkodie each made excellent stops to keep things clean.

As Dynomaam noted, Horst appears to have two hands firmly on the starting CB job. Now it's just a matter of time for him and JT to build more chemistry and iron our the kinks.

2. Only Will can stop Bruin

Let's get this out of the way - Will Bruin was incendiary in the first 20 minutes against New England. You could see both relief and determination on his face throughout the match, and he deserved every bit of those points Saturday after the off-season he had. 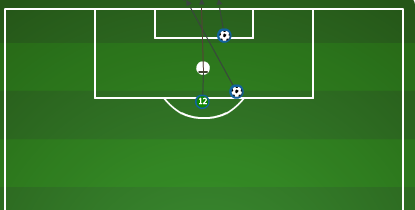 I know there were some bemoaning his only miss of the game (on his easiest opportunity), but let's keep things in perspective. Bruin had a couple months to stew about being called every name under the sun for his scoring woes last year. In 20 minutes he shut all of us up. So he missed a breakaway late in a decided match-up? I think we can forgive him.

But expecting 66% goal-scoring rate for Will is unrealistic. He'll need to make more 1-v-1's, and less 18-yard half-volleys, if he hopes to score among the league's best. Against a Montreal defense that got their bell rung by Frisco last week, we should get some immediate data on Bruin's ability to keep his goal-scoring going.

Here's a little transcript of my house around the time Tony Cascio got injured:

Knees aren't supposed to bend like that, in case you didn't get that from the inevitable screaming inside your head as you watched Tony hit the ground.

Word is still out on the extent of Cascio's injury. I'm not a doctor yet, and have relatively little experience predicting exact injuries from film, so I can talk about this more when we get further information. Initially, what you were all likely worried about - ACL, MCL, medial meniscus injuries (the Unhappy Triad) - was a sincere and unwanted possibility.

Fortunately, Dom thinks Tony may rejoin the team later this week, indicating that this injury is more "strain" or "twist" as opposed to "tear", "snap", or any other scary word.

Andrew Driver is the likely replacement for Cascio on the right wing starting next week. The only possible option would be for OBG to move back out wide and Alexander Lopez to come front and center, but that may be too much too fast for the young Honduran.

In the meantime, we'll see how Driver's "run fast past you" approach to offense works against Montreal. He almost had a goal last week, and showed some flashes, but that was against a tired and downtrodden Revolution. Driver will have to show both the ability to go at defenders, and the wherewithal to hold up play and find Bruin in the center.

Diego Fagundez is really good. Honestly, he is one of my favorite non-Dynamo players in MLS. His scooped pass to Rowe, and long bending shot that hit Tally's crossbar, were absurd.

And he is just the type of player that will destroy our defense.

This goes back to our patchwork back four, but with one specific point. Dynamic, mobile, forwards are going to take advantage of Taylor and Horst until we stop watching their every move with bated breath. We should see next week how fast our centerbacks adjust to another mobile striker in Marco Di Vaio, except poor Di Vaio is still serving his 3-match suspension for his Wolverine-like slashing of our very own Corey Ashe.

What to watch for:

From what little information we have, this team looks very promising. Our defense has some big question marks attached, but not as many as they did last week. Bruin looks strong, if imperfect, while Giles Barnes looks every bit as menacing as he did last year despite his lack of goals against NE. How we adjust to Cascio's injury and a strong Montreal Impact attack will prove vital to continuing this (1 game) win streak.

Of note, however, is how well Bruin's goals and the Revolution's impotence in front of net served to cover up our imperfections. We won't get the same breaks in our upcoming matches against the suddenly talented Whitecaps of Frisconians.

These early games against good-but-not-great opponents are proving increasingly more important as other Eastern leaders are dropping points. Add that to the CCL matches taking up Sporting Kansas City's time, and we have the possibility of building a decent lead at the top of the East if we don't screw things up.

What do you think, Dynamo fans? Have other concerns from last week? Or are you still basking in the glory of fireworks and orange smoke? Let's hear it below.