A look at the first week of Fantasy MLS and how clearances, blocks and interceptions (CBI) makes a huge difference for defenders.

The first week of MLS is officially in the books, and I received a harsh reminder that no matter how much preparation is done, the Fantasy MLS gods can still be unforgiving. All of my players got starters' minutes, but seven out of the starting XI ended on three points or less -- just one more point than the two freebie points given for playing 60 minutes. All in all, I had an average week, but average weeks aren't what make FMLS Champions. Here was my XI: 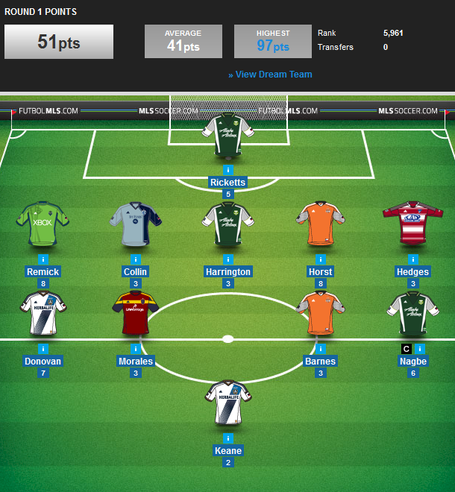 Week 1: Dia del Oso
There were only four clean sheets (Home: SEA, HOU | Away: RSL, CLB) recorded between the 16 teams on display over the weekend, bucking last year's trend of low-scoring openers. Will Bruin (FWD, $8.2) and Nick Rimando (GKP, $6.1) led all scoring with 15 points each -- Bruin via two goals and an assist, and Rimando with a clean sheet and a late penalty save on Robbie Keane. Mauro Rosales (MID, $7.5), Josh Williams (DEF, $8.5), and Kenny Miller (FWD, $8.6) all picked up 12 points for their fantasy managers.

Here are the top scorers in Week 1 (Full fantasy stats at: MLSSoccer.com): 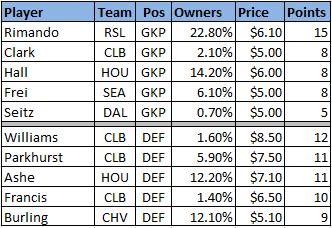 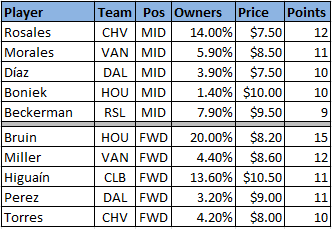 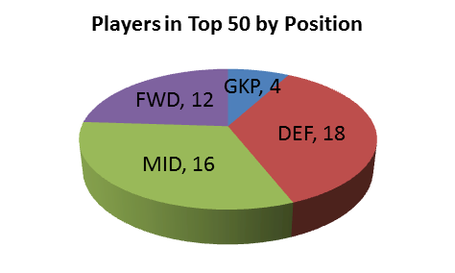 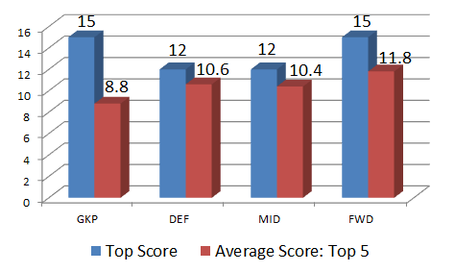 Week 2: TF-See (Andrew Wiebe's and Jason Saghini's takes on round two)
We will soon find out if Toronto FC can live up to the hype surrounding their off-season acquisitions, who have yet to practice together. The Sounders have won their last five encounters with the Reds, most recently via a 2-1 victory at BMO Field.

Goalkeepers / Defenders:
Seattle, Houston, and Portland look to be the best options, as all have promising home matches. The jury's still out on Sporting KC, as they are still dealing with injuries to their back line and they have a mid-week CCL match. It's hard to bet against Rimando after his stellar Week 1 performance, but keeping the Earthquakes goalless at home is no easy task. Rimando is already at a price of $6.1, and Frei will likely go up to $5.1 before this weekend's matches.

Managers that fielded value players David Horst ($5.6) and Dylan Remick ($4.1) were rewarded with 16 points between them, but it's not completely clear whether both of these guys will be starting Round 2. Fortunately, Seattle's match is early in the weekend, so those that are able to catch the Sounders' starting XI will be able to play Remick again if Leonardo Gonzalez is not yet back to full fitness. Bakary Soumare, Jose Goncalves, Austin Berry, and Norberto Papparato each picked up three bonus attacking points from CBIs (clearances, blocks, and interceptions), so while none of them were able to produce a clean sheet, they will be on my watch list. Defenders that rack up CBIs provide a more consistent stream of fantasy points, reducing the dependency on clean sheets.

Midfielders / Forwards:
Vancouver's midfield was by far the most impressive over the weekend. Pedro Morales and Sebastian Fernandez laid waste to the Red Bulls, and I expect them to continue to do so against Chivas USA. I also expect Portland's offense to kick into high gear soon, and a home fixture against the Fire may just be what the doctor ordered. As mentioned previously, Seattle have had their way against TFC in the past, increasing the likelihood of Obafemi Martins' signature backflips. Houston's Will Bruin played like the Bruin of 2012 against the Revs. If he can manage an encore performance this Saturday, a lot of FMLS managers will be happy, as he's the hottest player for the round right now with 1,423 transfers in.

Good luck, and don't forget to make your manual substitutions!