A look at the second week of Fantasy MLS, and how to survive without now-invaluable defender David Horst

In Fantasy MLS, it's often better to go with your gut feeling. Everyone was high on captaining our prodigal forward Will Bruin, and I was about an hour away from doing so, but the rational side of my brain screamed at me that midfielders are safer captain picks than forwards. Enter into the picture Eric Miller 's fat foot and a HUGE dose of home-field deflections, and Bruin bags another seven fantasy points against Montreal. Meanwhile, I could've picked virtually anyone else in my roster and scored better, but I thought for sure Portland's midfield was going to find their form against Mike Magee -less Chicago. Darlington Nagbe created Portland's late goal, but didn't actually get a proper assist on it, so I'm 0-for-2 on picking captains. I did claw one point back by manually subbing out injured Javi Morales for Matthew Fondy, leaving me with a decent 59: 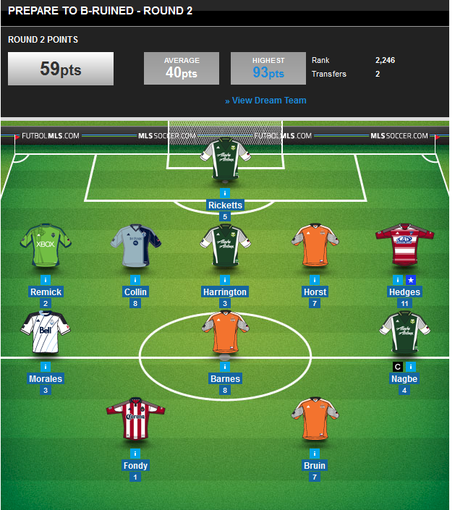 Round 2: Goonie Magic
Late-game heroics have almost become commonplace in San Jose, and this time it was defender Victor Bernardez providing two goals in the closing 20 minutes to secure one point for the San Jose Quakes, and more importantly, 18 points for the 2% of owners that had him on their rosters. Houston Dynamo posted its second straight shutout, and Jermaine Defoe showed all of the Toronto FC doubters that he is going to make the most of the big chances that he receives.

Here are the top scorers in Round 2 (Full fantasy stats at: MLSSoccer.com):

Round 3: A Horst, a Horst, My Kingdom for a Horst

The Dynamo are on a bye this weekend, which means that a lot of fantasy teams are in dire need of a reasonably-priced defender to make up for the lack of value options of David Horst, Kofi Sarkodie, and Corey Ashe. Last week, I stressed CBIs (clearances, blocks, and interceptions), and after two weeks, we're starting to get a picture of who is going to be providing consistent defending bonuses. If we take a look at the top CBI-producing players, and factor into the equation the number of CBIs they generate per 90 minutes per million fantasy dollars, we see that there are a few budget-priced options available: 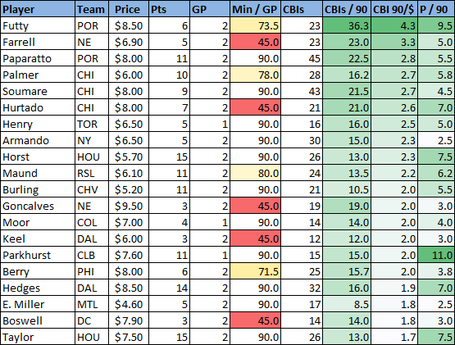 Andrew Farrell seems to be back in the starting rotation for the Revolution, and with Goncalves out injured, Farrell carried the bulk of the defensive duties. That will likely drop as Goncalves comes back from injury, but it's something to keep an eye on. Futty Danso is in a similar situation, as he is covering for the injured Pa-Modou Kah. Norberto Paparatto is cheaper than Futty at $8.0, and he is a CBI machine. He has scored a total of 11 points *despite* Portland giving up a goal in each of their first two matches. Lovel Palmer is the cheapest player to crack the top five in CBIs at $6.0, which means that every fantasy million spent on Palmer will return 2.7 CBIs per 90 minutes. Bakary Soumare rounds out the top five for CBI value.

On the attacking side of the pitch, I'm expecting Toronto to punish a DC back line that hasn't gelled yet. FC Dallas and Chivas USA have both scored four goals and given up three total in their first two fixtures, so I wouldn't be surprised to see a multi-goal game at Toyota Stadium.

Good luck, and be sure to pick a different captain than me!