Bernardo Anor, Vicente Sanchez lead the way in low-scoring Round 3

Share All sharing options for: Fantasy MLS Week 3 Recap: The Score From Anor

I Am a Wild and Crazy Guy
The Houston bye week was planned for. What wasn't planned for was the sluggish Portland start, the myriad of injuries, and teams like Chivas USA, FC Dallas, and Toronto FC lighting it up in the early rounds. All that, plus the real possibility of seeing a big hit to my team value over the next two weeks forced my hand a little earlier than I would've liked, so I opted to spend my wildcard. I was going to hold off a couple more weeks, but I believe an early wildcard can actually be beneficial. After two weeks, you have at least some idea of who the value picks are in the beginning of the season, and since there's a free pass in Weeks 11, 15, and 16, the best bang for your buck is either going to be now, while player prices are the most volatile, or down the stretch in weeks 24-30.

Seattle's unexpected shutout at Olympic Stadium wound up hurting me, as all the players who were depending on Dylan Remick to produce some points were gifted seven from the young winger. Nevertheless, my team had a solid performance all around: 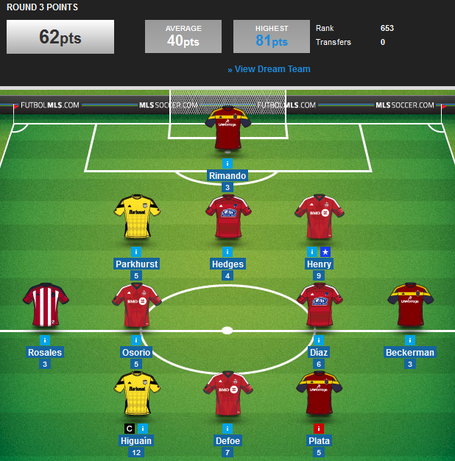 Diamonds in the Rough
The wildcard paid off, as it helped me restructure my team to swap out my useless $4.0 players. Last week, I pointed out some value defenders that pick up CBIs. This week, I sought out cheap players that get playing time, such as Dylan Remick (DEF, $4.4), Thomas McNamara (MID, $4.8), Leonardo Fernandez (MID, $4.8), and Eric Miller (DEF $4.7). These are guys that I won't necessarily be depending on for big points, but they're useful to have on the bench in case of an emergency. If I have to make a game-day substitution, I know that at least one of these guys will have a chance at picking up something for me. Here are all of the players who are no more than $5.5 in price that have scored at least seven fantasy points thus far: 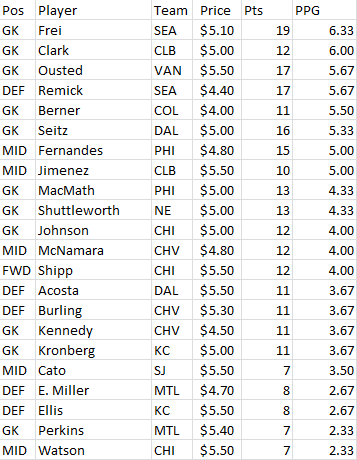 Round 3: Home-cooking
Aside from the aforementioned Seattle win in Montreal, the home teams picked up five wins and three draws over the weekend. Columbus Crew's Bernardo Anor picked up a brace against Philly, the first from a header off a Federico Higuain corner kick, and the second from an Adam Moffat-esque rocket that should easily take GOTW. Jermaine Defoe netted his third in two games, matching Will Bruin and Erick Torres in the early race for the Golden Boot. Vicente Sanchez was on both ends of two controversial penalty calls in Colorado, banging one in and then earning another against the Portland Timbers in the span of two minutes.

Here are the top scorers in Round 3 (Full fantasy stats at: MLSSoccer.com): 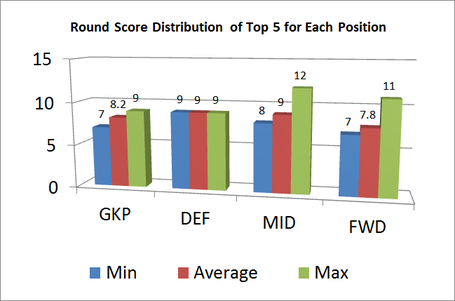 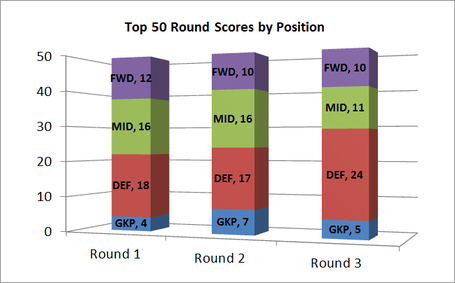 LA Galaxy have a bye this round, but there is still plenty of MLS action planned over the weekend. Houston gets their first road test against the Whitecaps, who were dominant in week one, but have only produced one goal from their two away games. I like Philly this week, who are looking strong and play against Montreal and Marco Di Vaio, who's finally back on the field after last year's violent conduct in the playoffs. Chicago's away to DC United, but it's yet to be determined when DC are going to start figuring things out. Dallas seem to be favorites, hosting a struggling Portland team, and New York has a good opportunity to get back on track at Red Bull Arena against Chivas USA.

Good luck, and be sure to pick a different captain than me!