When it comes to the first game of the season you want to set the right tone not only on the field but also in the stands. To make sure the stage was set the Dynamo team along with BRAWP Racing filmed 'Torque' to make sure everyone knew to go hard, go fast, and have no fear this season.

Share All sharing options for: Torque: Behind the Houston Dynamo Intro Video

Videos shown on the video boards at stadiums have become a larger and larger part of the in-stadium sports experience. Videos are used to amp up fans with the hopes of setting the tone and energy of the game to be played on the pitch. This year the videography team with the Dynamo set the bar high with 'Torque', the video shown prior to the season opener against New England. If you haven't seen the video now's your chance-

And if your heart rate isn't up after watching that then you may be dead..or a Dallas fan.

The Brain Trust and Creation

The video came about when Anthony Vasser sought to show just how deep support for the Dynamo runs in the community. After talking with Nancy Shaddock of BRAWP Racing about some of the 'Dynamized' bikes fans have the pair set about turning his concept into reality.

"This years intro video (Torque) has been a concept of mine for a while. For 2014, I wanted to create something that indisputably conveyed the fans (and my) excitement for an incredible season. I'd like to think I contributed some energy to the team in overwhelming New England!" Vasser said by email.

"With DynamoTV evolving to supplement coverage with entertainment, we toy with numerous concepts to engage and energize fans. While the concept had been around a while, it had too many niche requirements to seriously pursue. "Torque" really took form when I had a chance conversation with members of BRAWP Racing, comprised of not just passionate Dynamo fans, but those who raced bikes painted in a Dynamo theme! It's not often a perfect combination of fan passion can be reflected back onto the team! And I was excited to finally find the unique elements to make a my racing video! The players were immediately intrigued with the concept, actually leading to the orange McLearen, owned by a contributor to Brad & Tally's (Banded) Brigade."

Nancy Shaddock handled getting the vehicles and riders together for filming while Vasser ran the idea past the Dynamo's marketing department.

"I had seen a Dynamized bike at the Texian Army tailgate last year and found the owner of that bike, Texian Army member, Wally Walarusi. He did not have much experience on a closed track so we had a mutual friend, Sloan Essman, as well as a Brawp member, John Rangel (aka NinjaBrawp) ride his bike for filming." said Shaddock of the riders, "For bike #2, my, son, Sid Shaddock (aka SleepyBrawp), a 17 yr old senior at George Ranch High School, rode the orange and blue 2007 Yamaha R6. Kris Lillegard (aka KrazeBrawp) rode bike #3, his 2013 white and orange MV Agusta F4 RR. Brandon Yannerella (aka BrandoBrawp), Brickwall Firm member, drove bike #4, his white and orange 2008 Ducati 848, and Chris Hamlett, rode bike #5, his white and orange 2012 KTM RC8 RS. All stunt riders are CMRA racers (Central Motorcycle Roadracing Association) and all but one rider are instructors for FastLine Motorcycle School. The beautiful orange McLaren is owned by Brickwall member, Jeff Reimert."

With BRAWP racing on board, filming took place over two days. The first day was at MSR Houston with the riders from BRAWP racing on a closed track. Things kicked off at 9am with the riders getting in practice laps and tech support figuring out the best angles for the cameras. They mounted 6 GoPro cameras to camera bikes to get the racing footage. VasserHouston Dynamo roster arrived at noon and they filmed until 5pm. 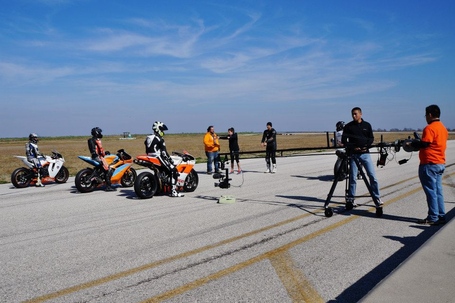 "My husband, Peter Shaddock, was the tech consultant for the track filming and rode one of the two unseen "ghost camera bikes" that captured the GoPro footage at the track." said Shaddock of the first day of filming.

A few weeks later they were able to get the bikes, the riders and Dynamo players into BBVA stadium and of course Tally Hall driving the orange McLearen. During the break between filming dates the KTM crashed during the CMRA races and several of the riders were injured as well. Short rides and riders for the stadium footage, Boniek Garcia drew the short stick and didn't get to suit up for the video.

"The players had a lot of fun posing with the bikes and the McLaren and wearing the leathers and helmets." Shaddock said of filming with the players at BBVA, "Anthony had all the shots planned out since we were on a tight schedule with players that day." At the stadium they filmed the riders driving the bikes down the tunnel and then drove the vehicles around the stadium, behind a camera vehicle for stadium and EaDo footage. 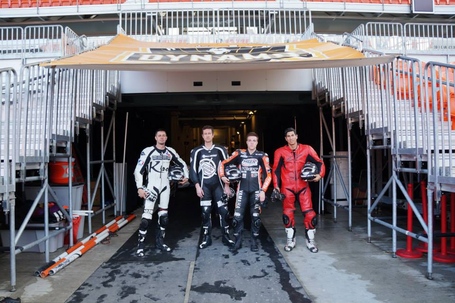 "We wanted to kick start the season with an adrenaline rush and the video (has) done that well. The players have been talking about it since the filming and we were all excited to see it released." said Shaddock, "They definitely felt the message Sat night: Go hard, go fast, and have no fear!"

Hard, fast and with out fear was the perfect theme for opening night as the team won 4-0 over New England.

If you want to know more about BRAWP Racing check them out https://www.facebook.com/BrawpRacing