Clint Dempsey doubled up on the multi-goal matches. Can the Deuce strike thrice?

Week 6: Deuce x 2
USMNT fans can't help but be happy that Clint Dempsey (MID, $10.2) is finally starting to help turn things around for himself and for the Seattle Sounders with only a couple of months left until the World Cup. His three goals against the Portland Timbers and two against FC Dallas have left MLS Fantasy owners riding high. My strategy of picking up a couple of Houston Dynamo players ahead of the double-game weeks hasn't panned out nearly as well, but hopefully that will turn around soon. For now, I'm managing to hang in there, despite a lack of anyone named "Clint" on my squad: 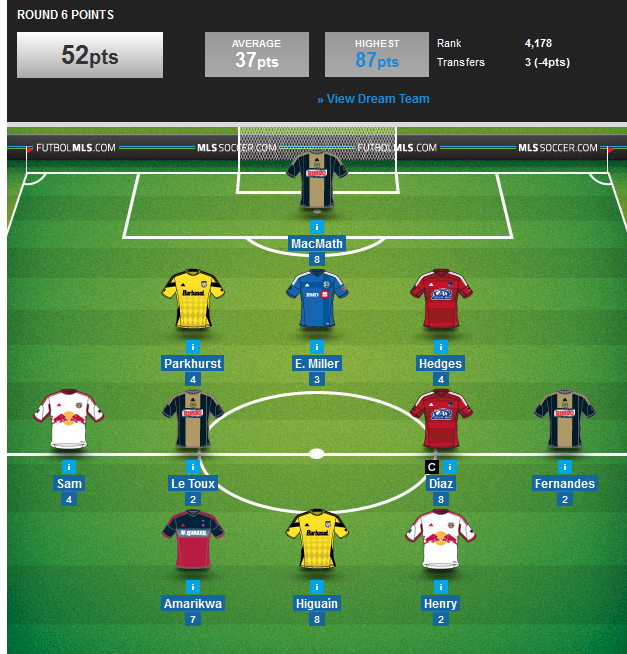 I should know better than to NOT captain Higuain

I was a little nervous about playing Zack MacMath (GK, $5.2) against Real Salt Lake, but the penalty save gave me an unexpected five points. The Philadelphia Union play twice this week, so if the Philly back line can get at least one clean sheet, I'll be picking up good points for both MacMath and Austin Berry (DEF, $7.8). Berry seems to be back at full match fitness, and pulled in 19 CBIs and 11 recoveries against RSL. Quincy Amarikwa (FWD, $6.2) has definitely backed up his FMLS talk with solid numbers on the field, scoring his third seven-point game in a row for around 60% of the price of Federico Higuain.

Here are the top scorers in Round 6 (Full fantasy stats at: MLSSoccer.com): 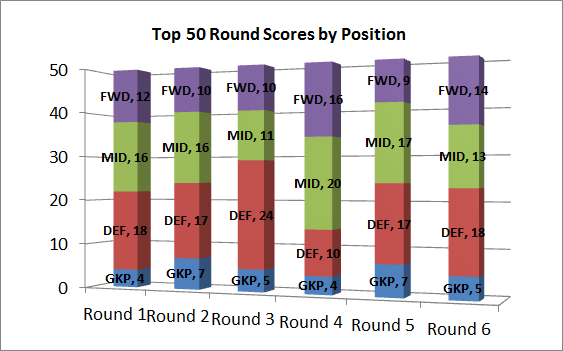 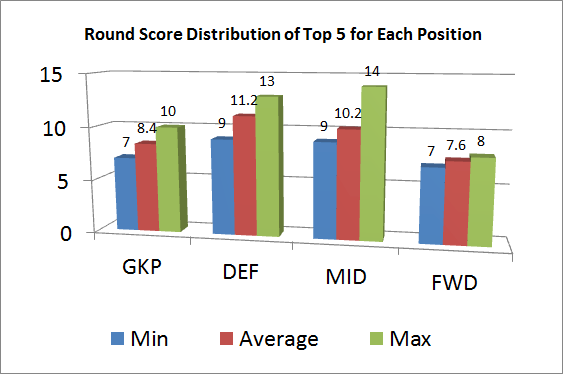 Are you ready for the Double-Game Week?
Last week, I mentioned several players to look at for Weeks 7 and 8. A couple of other options have emerged over the last week worth noting. One disclaimer: I will be waiting until tomorrow evening to pick up my last Union player. Hackworth has a habit of rotating players fairly regularly, so I strongly advise making sure your target's available in the starting XI on Wednesday before burning the transfer. Here are the candidates of those who are not already on my roster (MacMath, Le Toux, Fernandes):

Austin Berry (DEF $7.8): I mentioned Berry above, but now that he's healthy, he's a cheaper option than Okugo for some safe CBI points.

Maurice Edu (MID $9.2) : He's expensive, but with goals in his last two games and a strong likelihood of seeing 150+ minutes, he's a strong pick.

Vincent Nogueira (MID $8.5): Four games with only one bonus point to show, and seven points in each of the other two games. So far, he has been a nailed-on starter.

Brian Carroll (MID $7.0): Carroll's definitely not the sexiest pick, but it's safe and good for a few bonus points.

Christian Maidana (MID $7.4): Has been used sparingly, but might get the nod from Hackworth to start. If you can predict the exact starting XI Hackworth's going to put out tomorrow, I'd like to talk lottery numbers with you.

Andrew Wenger (FWD $6.1): Wenger's a cheap option for a gamble, and has already shown signs of promise back at home in Philly.