Today's Fantasy MLS article is short and sweet: I've cherry-picked the key double-game week players and calculated their key stats up to this point in the MLS season. If you haven't decided on who to bring in this week, look no further!

The big DOUBLE GAME WEEK is upon us. Are you ready? The transfer window closes Wednesday, May 7 at 6:45PM Central, so if you haven't made your moves for the week, get crackin'!

This week's article is going to be short and sweet -- I've filtered out who I think are some good candidates for the DGW rosters, and calculated some of the more useful statistics for each position. You can see some more detailed description of why some of these players should be included in my article from last week, but all of the players listed below share the following attributes:

A couple of players have been highlighted -- these are the ones that may be out due to injury (Ricardo Clark and Mauro Diaz), or in the case of Chris Seitz, may just not be picked as the starter (he was rested last week). 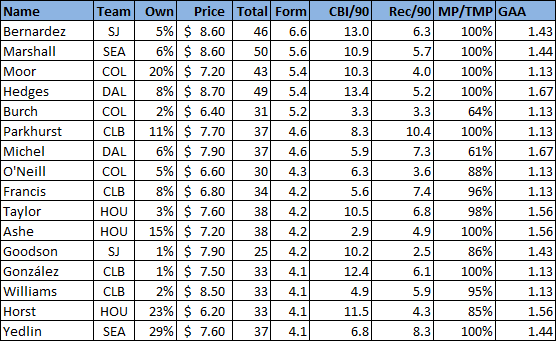 Do you have someone that you think should be added or removed from the list?

What does your lineup for this week look like?

Best of luck, and remember: be sure to pick a different captain than me!