One day before the 2014 FIFA World Cup Finals tournament begins, MLS has scheduled two matches: DC at Montreal and FC Dallas at Portland.

2014 FIFA World Cup madness is a little more than a week away from being upon us. Fantasy MLS madness rests for no one, though, as the Week 15 transfer window starts this evening (Wednesday, June 4) at 6:30 PM Central. This will be the first of two consecutive unlimited transfer rounds, which means that managers can make as many transfers as he or she wants without incurring any points penalties. Since there is another unlimited transfer window in Round 16, Fantasy MLS has been gracious enough to give us the luxury of only having to worry about the two matches in Round 15 for these transfers.

Below, I've narrowed down the top choices for each of the four teams playing (stats provided by MLSSoccer.com): 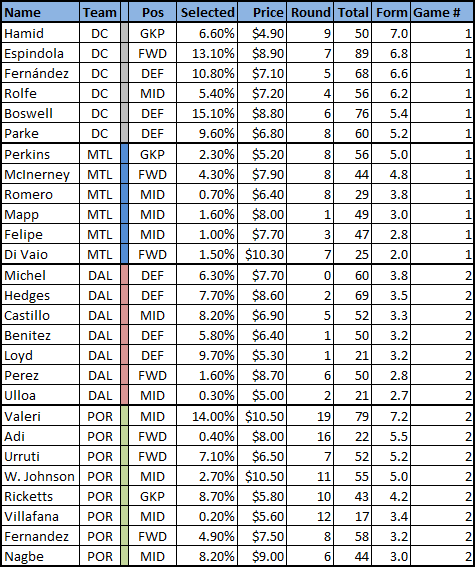 DC United @ Montreal Impact
Even though DC is playing away and Montreal bossed New England recently, I'm having a hard time picking Montreal in this match. Fabian Espindola and Colin Rolfe have been on fire, and DC's back line has been solid as well. Jack McInerney has been one of the bright spots on the field for Montreal, and is likely worth a gamble. Beggars can't be choosers.

FC Dallas @ Portland Timbers
Portland are easy favorites in this match, but with the upside-down nature of MLS, anything's possible between any two sides. Diego Valeri has been dishing out assists like they're a dime a dozen, and Will Johnson is about as close as you can come to a guaranteed starter, but both will cost you a pretty penny. Michel was still questionable at the time of this writing, but if he sees minutes in Round 14, he'll be on my final team in Round 15.

The biggest problem with this match is that is comes second in the evening. We won't know the starting XI of these two teams before the transfer window ends, and with Caleb Porter's propensity to rotate the starting lineup from match to match, there's no guarantee that the four Portland players in your roster will be out on the field at the opening kickoff. The gamble comes down to this: how many DC and MTL players are you willing to insert in your starting XI, and how many DAL players are you willing to substitute in to cover for any Timbers that turn up missing on Wednesday night? Make sure you have all of the positions covered -- you must have at least three defenders, two midfielders, and one forward (and one goalkeeper, of course!) There's no 2-5-3's, 5-1-4's, or 5-5-0's!